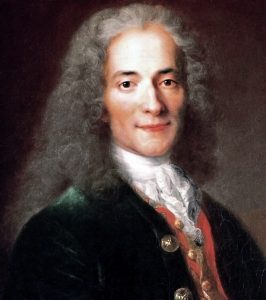 Last month we considered the work of the famous skeptic Voltaire. His railings against Christianity and the Bible were tireless. In 1764 he wrote, “The Bible. That is what fools have written, what imbeciles commend, what rogues teach and young children are made to learn by heart.”  It is reliably reported that Voltaire once held up a copy of the Bible and triumphantly proclaimed that in 100 years this book will be forgotten and eliminated! The infidel’s writings became so divisive that in 1754 Louis XV banned him from Paris. He relocated to Switzerland and purchased an estate in Geneva called Les Délices. After Voltaire moved on, the residence was occupied by the Tronchin family. Colonel Henri Tronchin became President of the Evangelical Society of Geneva. Fifty-eight years after Voltaire’s death, Les Délices is reliably reported to have been used as a repository for Bibles, the very book Voltaire had assigned to extinction! The skeptics’ hammers all wear out, but the anvil of God’s Word remains unchanged through time.