The Bat’s Tale at Carlsbad Caverns 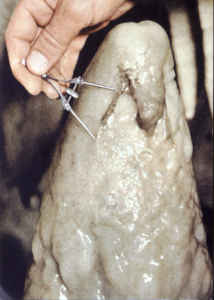 The October 1953 issue of National Geographic published a 35-page pictorial overview of Carlsbad Caverns. One of the 33 photos displayed a bat encased in a stalagmite. [Figure 1] The caption stated: “This bat, falling on a stalagmite, became firmly cemented as the stone grew. Feet are buried; the head hangs down; wing bones show up darkly.” (Sutherland, 1953, p. 442)

This intriguing picture became iconic in creation science circles since it illustrated the rapidity with which stalagmites can form under optimal circumstances. Dr. Silvestru notes that this bat “has some preserved tissue besides bones, evidence it was covered rather quickly.” (Silvestru, 2008, p. 68)  This negates the simplistic uniformitarian notion that speleothems, such as stalactites and stalagmites, must be hundreds of thousands to several million years old because they typically grow so slowly in the present.

Over the years, the mainstream story of the age of the speleothems (calcite formations) at Carlsbad Caverns has continued to evolve and new evidence is making the creationist point even more evident.

A 1937 National Park Service (NPS) bulletin discusses the Carlsbad limestone: “This limestone was formed originally in a shallow inland extension of the ocean some 200 million years ago.…” (Isabelle, 1937, p. 1) The article goes on to describe the carving of this ancient limestone to form the cave shortly after the region was uplifted about 60 million years ago.

The 1953 National Geographic article declares that Carlsbad Caverns are millions of years old (Sutherland, 1953, p. 437). But it does note that the mineral formations stand on top of geologically recent material. “Few of these secondary formations can exceed 100,000 years, for many rest on silt and fossils believed to be of that age.” (Sutherland, 1953, p. 446) Perhaps Mason Sutherland realized the incongruity of the old assigned age and the photo of the bat preserved in the Papoose Chamber at Carlsbad. 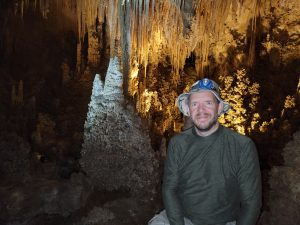 Figure 2 – The Author at Carlsbad

In a 2001 report published in the journal Science, geologists Polyak and Provencio theorized that the Carlsbad Caverns was carved out of ancient limestone by hot, rising water enriched with sulfuric acid (Polyak and Provencio, 2001). Polyak, et al. (1998) calculated that the cavern’s largest rooms were only about 4 million years old. What about the speleothems? The most common method of dating these calcite formations is uranium-thorium (U-Th) disequilibrium dating and Brook, et al. (2006) reported on 46 Carlsbad speleothems that were dated using this method and yielded ages from 12,500 years to 164,000 years. They note that there have been high amounts of variability in stalagmite growth (0–70 mm/kyr) throughout glaciation.

Perceptive visitors to Carlsbad Caverns have noted the evolving story of the signage. “The visitors’ sign originally said the room was at least 260 million years old, but it was changed in 1988 to read 7–10 million years, later 2 million years, and now it’s gone.” (Matthews, 2018, p. 70) During my visit, park rangers gave a variety of answers when I inquired about the age of the cavern, ranging from “millions of years” to “we don’t know.” [Figure 2] 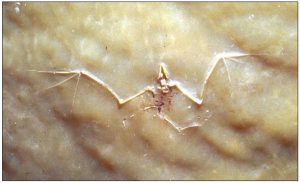 But NPS material still presents the public with a dated story of a more ancient age. A 2020 pamphlet distributed by the Park Service states: “The bulk of speleogenesis that created the modern karst systems and features at CAVE occurred within the last 12 million years. The origin, timing, and process of this speleogenesis is complex, subject to ongoing debate, and beyond the scope of this paleontologic inventory.” (Kottkamp, 2020, p. 19) This document displays a bat skeleton incorporated into flowstone on the front cover [Figure 3]. A black and white version of the classic photo of the bat in a stalagmite appears on p. 29. How can such an ancient cave age estimate be reconciled with apparent rapid speleothem growth?

The NPS website states, “Today, few speleothems inside any Guadalupe Mountains caves are wet and actively growing. This is a direct result of the dry desert climate. Most speleothems inside Carlsbad Cavern would have been much more active during the last ice age—up to around 10,000 years ago—when the Guadalupe Mountains received a great deal more rainfall than what today’s desert climate receives.” (Nps.gov, 2017)

Creationists would agree with most of this statement. They have made the case that massive caves like Carlsbad were carved out rapidly and catastrophically during the recessional stage of the Genesis Flood. Nelson (2020) provides hundreds of modern structures that contain rich calcium carbonate deposits, including stalactites and stalagmites under bridges, tunnels, pipes, mines, etc. We know these formations can grow rapidly. Silvestru (2012, p. 46) makes the potent point that it is not reasonable to posit a stable drip source over hundreds of thousands of years fueling the growth of a particular speleothem. The evidence continues to grow that speleothems were made rapidly and catastrophically.

The mineral formations might have begun to appear fairly soon after the Flood waters drained off. Michael Oard (2020a and 2020b) makes the case that much of the cave decorations likely appeared during the post-Flood Ice Age when conditions would seem to be optimal for speleothem growth. By then, there might have been a significant population of bats inhabiting the Carlsbad Caverns. So, it is quite plausible that some of them could have become incorporated into a quick-forming flowstone just a few thousand years ago. This stands in stark contrasts with the NPS website which states that Carlsbad decorated itself drip-by-drip, over the past million years or so (Nps.gov, 2017). 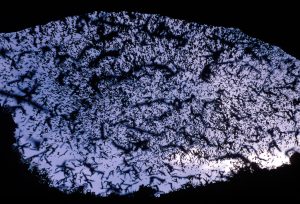 Currently, Carlsbad is home to approximately half a million bats. There are over a dozen species, but the overwhelming majority are Brazilian free-tailed bats. These bats are so named because their tail extends about an inch beyond their uropatagium (the posterior membrane between the two hindlimbs).  Indeed, it was the flight of the bats that arrested the attention of young Jim White in 1901. The teenage cowboy stopped his horse in the area because of a strange sight that he saw behind the hill. Rising from the ground was what seemed to be a lot of smoke. He turned and galloped over to investigate it. To his surprise he found out that the “smoke” was actually millions of bats flying from a huge hole in the ground. [Figure 4] Later, he took old barbwire fence and twisted it around sticks to make a ladder to get down into the cave. White made Carlsbad Caverns his lifelong obsession, guiding groups down to see the underground wonders. In the 1920s Carlsbad Caverns was declared a national monument. But it remained in obscurity until the National Geographic articles in 1924 and 1925 brought the vast caverns to the attention of a wider audience.

Occasionally whole bats are preserved in the driest portions of the cave. “Bat mummies occur within several different areas of Carlsbad Cavern. One grotto contains several mummified bats. Most are well preserved and some still hang from the walls, ceilings, and cave formations…. The room’s isolated and unusually dry climate are proposed explanations for the mummies.” (Kottkamp, 2020, p. 52) 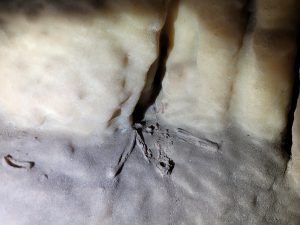 From 1927-1946 Col. Thomas Boles was Superintendent of the Caverns. He effectively promoted Carlsbad and a steady stream of visitors came annually. By 1952, attendance at Carlsbad rose to 530,000 visitors annually. As interest continued to grow, National Geographic determined to do another significant article on the underground wonder, hence the 1957 piece by Sutherland. Carlsbad is one of the world’s deepest, biggest, and most decorated caves. The many underground rooms go for more than 30 miles. The deepest part, called the Bottomless Pit, is 1,027 feet below the surface. The famous Big Room is 14 acres in size! The Bat Cave is the primary home of the hundreds of thousands of bats, and their evening flight out of the natural cave opening has become a major tourist attraction at Carlsbad. 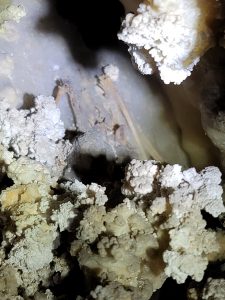 I visited Carlsbad Caverns in March of 2021 with the objective of personally investigating the famous bat encrusted in a stalagmite. At the time, the trail to the Papoose Chamber was closed due to COVID. But helpful park rangers showed me two other bats incorporated into formations. The first was on a slight shelf made by a waterfall formation. Apparently an aged or sick bat had landed on this fairly flat flowstone and died. Its bones became incorporated into the sheet flow. [Figure 5] The second preserved bat was more difficult to photograph. It is entombed in a large popcorn formation. The bat remains are in a cavity behind the popcorn. [Figure 6]

How Significant for Creation Science is a Bat Enclosed in a Speleothem?

The bat remains I observed in the flowstones were only bones. Clearly, such skeletal remains can last millennia, especially in a cool cave environment. The active, wet years would reduce bone life, but for many centuries New Mexico has been arid. Hence most of the speleothems are dormant and the cave is fairly dry. Land, et al. (2006) claim that bat skeletons littering the floor by the hundreds of thousands of bones are likely more than half a million years old. Since the cave is a very stable 13°C, measured collagen decay rates do suggest that bone could last over 100,000 years. But it is not plausible that these bones would last a million years as speleothems slowly formed. 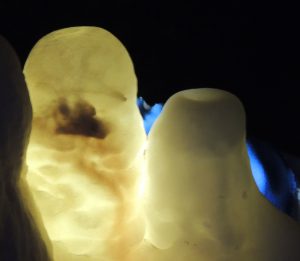 While I was at Carlsbad, I learned of an unusual bat fossil in the Lower Cave. This bat is completely entombed inside a stalagmite (Figure 7). The large speleothem is part of the Colonel Boles Formation. The only way to see this bat is to backlight the flowstone and illuminate the bat’s remains in the translucent speleothem (kind of like an insect in amber). But the fascinating thing is that it appears to retain the soft tissue. [Figure 6] Skeletons might conceivably last for hundreds of thousands of years. But soft tissue certainly would have decayed in short order. Moreover, cave crickets scavenge the flesh off bats that die and land on the floor of the cave.

There is even a slight discoloration below the body of the bat. Perhaps this was due to leaking of decaying flesh and body tissue as the wet stalagmite formed around the dead bat, if so, this stalagmite must have formed very quickly indeed. Under the right conditions, even large calcite formations can be built in a matter of centuries. This fits very well with the Creation/Flood model.

In conclusion, it seems that the mainstream interpretation of speleothems at Carlsbad has become more nuanced over the decades. There is a greater recognition of the variability of mineral growth rates. Moreover, the assigned age of Carlsbad Caverns has been greatly reduced. Nonetheless, the bats incorporated into flowstone remain useful evidence to counter those remaining uniformitarians who persist in arguing that speleothems require millions of years to form. And a bat with soft tissue preserved is especially potent evidence for rapid formation, much quicker than the mainstream scientific community will acknowledge.

I want to thank Brian Thomas, Mike Oard and Vance Nelson for reviewing an early draft of this article and providing constructive feedback. I want to thank Ricky Rush for his assistance in field work and photography. Finally, I wish to acknowledge the help of NPS staff during my visit to Carlsbad.

Polyak, V. and P. Provencio. 2001. By-Product Materials Related to H2S-H2SO4 Influenced Speleogenesis of Carlsbad, Lechuguilla, and Other Caves Of The Guadalupe Mountains, New Mexico. Journal of Cave and Karst Studies 63(1):23-32.