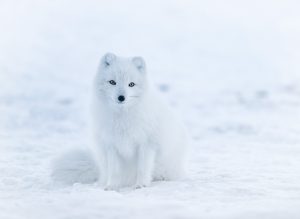 In biology, adaptation is defined as organisms adjusting to new environments or to changes in their current environment. For millennia, it has been observed that creatures are specially fitted to survive in rather specific niches. The Psalmist reflects on this beautiful fitness between certain animals and their habitat: “As for the stork, the fir trees are her house. The high hills are a refuge for the wild goats; and the rocks for the conies ” (104:17b-18). Other examples include birds whose beaks are perfectly fitted to crack open the nuts found on their particular island. Camouflage is a very common adaptation. The animals that live in the Arctic often have white fur, which matches their snowy environment…a benefit to predator and prey alike. In contrast, a lot of rainforest animals are green. Still another example is symbiosis, when interaction between different organisms living in close association benefits both. Like the uncanny match between specific flowers and the long proboscis (straw-like appendage used for sucking) on the local butterflies and moths. How do we account for such perfect fits in nature? One possible explanation is that God designed each of these very specific niches and fixed the populations in place. This rather rigid view of design runs into problems when we see evidence that ancestral populations diversified in the recent past to accommodate available niches. It was this view of design (fixity of species) that Darwin argued against when he put forward his hypothesis that organisms slowly evolved by happenchance changes and natural selection. In the coming months, we’ll explore new evidence that bears on this key issue. We’ll see ho explaining adaptation is a powerful tool in the origins debate.