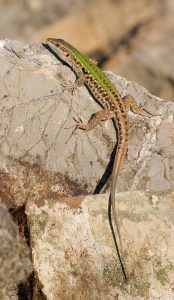 The title of a 2008 article by National Geographic article caught my eye: “Lizards Rapidly Evolve After Introduction to Island.” The fascinating article explained how scientists were surprised in recent years just how quickly whole suites of genetic traits can be changed, almost like a cascading switch was thrown. Insectivore Italian Wall Lizards were transported to a Mediterranean island far enough offshore that there were very few insects, but plentiful vegetation. One might have expected this small lizard population to eventually starve. But in just a few decades the lizards developed a dramatically different digestive system and survived nicely as herbivores. This remarkable change even affected the strength of their bite, enabling them to masticate tough vegetation. It also transformed their digestive tract! Obviously, such rapid change is not due to slow selection of tiny random mutations. In fact, it is not random at all. Rather, it seems to be highly regulated. The changes, unconscious to the lizards, precisely addressed the pressing environmental need! Geneticists use the term “epigenetics” to describe these rapid DNA changes that are based on environmental feedback. We will discuss this amazing mechanism more in coming blogs, but it has all the hallmarks of being a complex designed system.