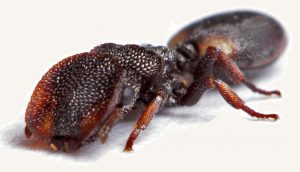 In recent months we’ve been discussing the ability of animals to adapt to their environment in a rapid fashion, quicker than scientists had previously thought. A 2018 article in Nature was entitled: “How warp-speed evolution is transforming ecology: Darwin thought evolution was too slow to change the environment on observable timescales—ecologists are discovering that he was wrong.” Last month ARS Technica reported on fruit fly genomes morphing each generation much more than expected. The article is entitled “Evolution can occur really, really rapidly.” But, of course, their is no actual evolution. The end product is just a variety of fruit fly. We have also made the point that these changes were not random. They are predictable, highly functional and a good fit for the changing environment. Changes in spider populations on islands were also repeatable, following set patterns on different islands.

This month I want to focus on a third “r”. These adaptations are reversible. Turtle ants have long fascinated biologists due to their unusual soldier caste with large armored heads. Just a year ago, an article on turtle ants in the journal PNAS stated that “the evolution of head shape and size is extensively reversible, repeatable, and decoupled within the soldier caste and relative to the queen caste, underpinning the lineage’s diverse nesting ecology. These findings reshape our understanding of caste evolution, rejecting a stable, directional process…” What these researchers and others are finding is that adaptation doesn’t move along a distinct line which might lead from one organisms to another. Rather, it circles back upon itself, like a switch being thrown one way and then back again. This is not what evolutionists expect!