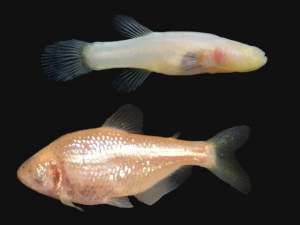 In recent months, we have discussed how certain biological adaptations happen very quickly and appear to be more like engineered, organism-driven systems than happenchance mutations. An article in this month’s CRS Journal highlights yet another fascinating example. Sometimes fish are swept into a cave by a large wave or a flood. It has been known that the fish that end up in a dark cave rather rapidly lose their eyes. Naturally, the eyes have no benefit and bring extra risk of injury. So, this loss is actually an advantage. But we are now learning the loss of eyes is only part of a broader suite of genetic responses to the lightless environment. Mexican cavefish raised in a dark environment had slower metabolism than their peers in the sunlight. The fish in the dark also had bigger mouths and were more aggressive in gathering food. They sleep less and are not as inclined to swim in schools. To compensate for the loss of sight, it was found that other senses (including taste) were heightened. The more we learn about the marvelous genetic potential stored in organisms, the more we stand in awe of our great Creator!