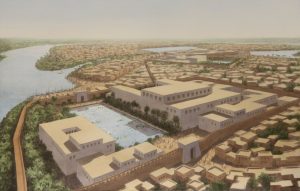 Although I primarily work with scientific apologetics material, there are occasionally significant archaeological finds that bear mentioning. Progress in recent years at a dig site in northern Egypt, called Tell-el-Daba, is one of those special cases. This location appears to match the ancient city of Avaris, capital of the Hyksos Dynasty. The Hyksos were a foreign people group who invaded ancient Egypt and began ruling in 1640 BC. Why is this dig noteworthy? For many years skeptics of the Bible claimed that the Hebrew nation never lived in Egypt. They accused Jewish scribes of making up the entire Exodus story to add drama to the birth of the Israeli nation. Historians had not been able to locate a region in Egypt that matched the Biblical Goshen, the land give to Jacob and his family when they moved to Egypt (Genesis 47). In 2010 scientists used ground-penetrating radar at Tell-el-Daba to outline a large city, including streets, houses, a port, and a side arm of the Nile River that once passed through the city. Excavations in more recent years revealed many four-room homes typical of Israelite/Canaanite architecture in the Bronze Age. The evidence has become quite compelling that this is the land of Goshen that was abandoned by Israel at the Exodus and subsequently claimed by the Hyksos. I will be traveling to Egypt later this month to personally investigate the site. 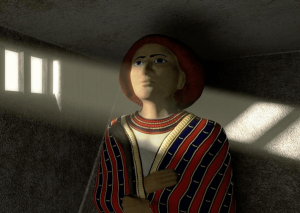 Excavations at Tell-el-Daba under Manfred Bietak brought to light a large palace complex with pillars, much larger than the surrounding buildings. Next, a pyramid and tomb complex were uncovered in the southern part of the palace garden. The tomb was almost completely empty…no body, mummy or grave clothes. This accords well with the suspicion that this Grand Vizier was none other than Joseph, son of Jacob. Exodus 13:19 records, “And Moses took the bones of Joseph with him: for he had straitly sworn the children of Israel, saying, God will surely visit you; and ye shall carry up my bones away hence with you.” But then things became very interesting. They found a number of white limestone pieces, remnants of an ancient statue. The seated statue was clearly the owner of the tomb. The Vizier’s face was painted in pale ochre, standard Egyptian pigment used to depict foreigners from Palestine. His features were Asiatic and unlike the Egyptians. The hair is red and the Grand Vizier was holding a “throw-stick.” These are typical Egyptian symbols for a foreigner. Paint on the back side reveals that the body was wrapped in a coat of many colors! It would be unusual for an Egyptian Pharaoh to allow a statue of a foreigner, let alone a memorial pyramid. But all of this fits perfectly with the Exodus story in the Bible!