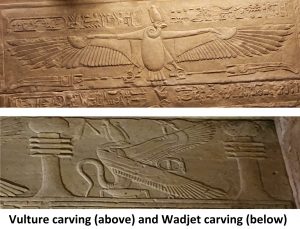 For many years I have been fascinated by flying serpent iconography in ancient Egypt. The Genesis Park website had featured a couple of these ancient depictions. This flying snake (or Wadjet in the original Egyptian) was an important symbol of lower Egypt. Numerous ancient authors mention serpents flying from Arabia into this northern region of the Nile Delta. The historical reports convinced me that the Wadjet was a smallish species of pterosaur that had persisted in this region into the time of the Exodus and through the close of the Old Testament period. You can read more about my earlier research into The Fiery Flying Serpent. As I traveled about Egypt last month, I determined to keep alert for additional drawings or carvings of this fascinating animal that I might run across. To my astonishment, I found flying serpent depictions all over the place! Carvings on Temple walls. Paintings in tombs. Artwork on coffins in the museums. Egyptian monuments are full of Wadjet depictions. I came home with nearly 100 photos! Some drawings are rather unrealistic: a long snake-like body with small wings and feet tacked on. Others show prominent wing feathers, like those of a bird. But some of the Wadjet art displays bat-like wings and bodies that fit a pterosaur well. Perhaps Egyptian artists (especially those in the Middle and New Kingdom timeframes) were merely copying the older motif or drawing based on secondhand reports. I have added several photos to the Ancient Pterosaur Depictions page. Egyptian history is a tale of unified and divided Kingdoms. The vulture was the symbol in the Upper Kingdom (the southern region that includes the upstream portions of the Nile). It was their parallel to the Wadjet in the Lower Kingdom. The vulture drawings are often rather stylized as well. Yet there is no doubt that the artwork is based upon a very real animal (see the comparison in the photo). So, if the Wadjet was not a living pterosaur, what was it? It would have to be a mythical, mosaic creature. I rather think that the Pharaohs chose a fearsome, real animal to be their symbol! I believe it is the same animal known to the ancient prophet: “The burden of the beasts of the south: into the land of trouble and anguish, from whence come the young and old lion, the viper and fiery flying serpent,” (Isaiah 30:6).