It is a fact that many reptiles may continue to grow throughout their lives, so some creationists have simplistically postulated that a dinosaur (“terrible lizard”) is merely the result of having a lizard live much longer than today in the favorable environment of the early earth. We know that men lived for over nine hundred years, so it is reasonable to conclude that animals also enjoyed longer lives (Genesis 5:27). What would a lizard that lived for centuries look like? The answer is that it would still be a lizard, not a dinosaur.

The differences between lizards and dinosaurs are greater than might appear at first glance. There are more fundamental, skeletal differences that can be seen between all lepidosaurs (e.g., living lizards, snakes and tuatara, plus many more fossil forms) and all archosaurs (e.g., extinct thecodonts, pterosaurs, and dinosaurians, plus living crocodiles).

Table 1 is a streamlined and simplified classification of reptiles (Based upon Zoological Record Volume 138). Note that lizards and dinosaurs are classified differently.

Having understood that lizards and dinosaurs belong to different subclasses within the class Reptilia, we can move on to discuss some of the important distinctions that prompted zoologists to classify them separately. An organism is classified by observing the entirety of its morphological traits in character space. Even though dinosaurs (and other archosaurs) clearly appear to fit the bill as reptiles, there are significant structural differences between them and other groups of reptiles. The most striking characteristic of the Archosauria is the triradiate pelvis. In the Lepidosauria (including lizards) the ilium extends dorsally, articulating with two, unfused, sacral vertebrae. The ischium and pubis are parallel to the ground surface, and fused in the midline (Romer, A. S., Osteology of the Reptiles, 1956, p. 320.). In the archosaurs (including dinosaurs), the ilium is expanded along its dorsal margin, and articulates with three or four fused vertebrae. The ischium extends posteroventrally and the pubis anteroventrally. The pubes and ischii are fused laterally for most of their length.

The teeth in lepidosaurs are pleurordont. That is, they are set in a long groove in the jaws with a high outer and low inner wall. The individual teeth are fused to the outer wall of the groove without roots. In the archosaurs the teeth are thecodont. They are set in deep individual sockets which enclose the long, cylindrical root of the tooth. There are also lower jaw distinctions with the lepidosaurs having a more developed coronoid process, which forms the upper margin of the mandible behind the dentary bone.

Skulls are another important distinction between lizards and dinosaurs. In the lepidosaur skull (See Romer, fig 62, p. 114.) the maxilla is firmly joined with the lachrimal and jugal bones, and there is no anteorbital fenestra (opening in the skull in front of the eye). In the archosaurians the maxilla forms the anterior border, and the lachrimal and jugal the posterior border of a large anteorbital fenestra. In the archosauria both the quadrate and quadratojugal bones form the jaw articulation, while in the lepidosaurs the quadrate forms the articulation. 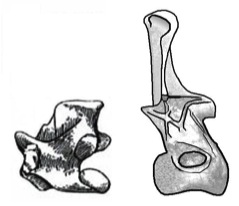 It is difficult to describe complex vertebrae, so I have included rough pictures (Figure 1, not to scale). Consider the differences in the dorsal vertebrae. On the left is that of a lepidosaur (monitor lizard) and on the right is that of an archosaur (sauropod dinosaur).

Another key distinctive is the single headed ribs of a large monitor lizard (Varanus) compared with the double-headed ribs of a superficially similar dinosaur, like Thecodontosaurus. There are also substantial differences in terms of locomotion/posture. From their skeletons, we believe dinosaurs had an upright stride (with legs typically falling straight down like a dogs), while a lizard’s limbs are sprawled out to the side.

There is good evidence for differences in physiology as well. The dinosaurs appear to have had a much more “hot blooded” metabolism than do lizards. Lizards are unqualified ectotherms (without a way to make their own body heat), growing slowly and taking years to reach sexual maturity. They do not deposit fibrolamellar bone, a dense, interwoven tissue indicative of fast growth and high basal metabolism. Lizards also do not form large amounts of Haversian canals (channels running through a bone in which blood vessels and nerves are located); which are another indicator, though not unambiguous, of higher metabolism and growth rates. Dinosaurs display them (especially evident in juvenile dinosaur bones).

Jackson’s chameleon is not a triceratops; bearded dragons aren’t descendents of anklyosaurs; and iguanas are not the modern version of iguanodons. There are very distinctive differences in the skeletons. These differences, not size, are the distinguishing characteristics of dinosaurs. They are not just bigger, on average, than most other animals. There were also massive salamanders, lizards, and crocodiles in the same ecosystem, fossilized along with the dinosaurs. But their bones are not confused with dinosaurs. If scientists found a monitor lizard in the fossil record (and did not know of them in modern history), they still would not call it a dinosaur. The monstrous, sea-going mosasaur discovered in the fossil record is classified as a lizard, not a dinosaur.

Also, there were many small dinosaurs – some no larger than a turkey. So we have large lizards and small lizards. We have large dinosaurs and small dinosaurs. All might have grown bigger in the past (because of a pre-Flood environment and because of fewer degenerative genetic elements). But lepidosaurs, like snakes and lizards, are more similar to each other (except in the characteristics that all reptiles share) than are lizards and dinosaurs. At the same time archosaurs, like dinosaurs and crocodilians, share more similar characteristics with each other than either of them do with lizards.

Although taxonomic differences are not always hard and fast scientifically, they are useful for scientists to study organisms. We observe certain anatomical similarities and naturally divide animals into convenient groups for our consideration. This discipline goes back far past the origin of Darwinism. Indeed, Carl Linnaeus, known as the Father of Taxonomy, lived from 1707-1778. As a Lutheran minister and avid gardener, Linnaeus was a creationist. “Linnaeus opposed the pre-Darwin evolutionary ideas of his day, pointing out that life was not a continuum, or a ‘great chain of being’, an ancient pagan Greek idea. He could classify things, usually into neat groups, because of the lack of transitional forms.” (Batten, Don, “Ligers and wholphins? What next?” Creation Magazine, 22:3, June, 2000, pp. 28-33.) There would be no reason to expect discrete kinds of animals through time if creatures were continually evolving. Linnaeus built his binomial system on what Englishman John Ray (1628 – 1705) had started. Both of these men were firmly convinced that God had “specially created” animals and plants, hence the use of words such as creature and species.