Distinct Biomes on the Early Earth 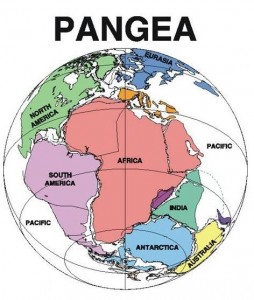 Genesis 1:9 states, “And God said, Let the waters under the heaven be gathered together unto one place, and let the dry land appear: and it was so.” The language suggest a single continent on the early earth. Scientists have long noted that the continents seem to fit together like a puzzle. Moreover, there is some evidence that the continental plates are moving apart, motions likely left over from when the great tectonic activity of the Genesis Flood broke up the original continent. This theorized original continent is called Pangea.

It seems that the original continent was divided into distinct geographical living areas (called biomes) with fully functioning communities of plants and animals unique to each. The great reptiles dominated vast inland lake and swamp regions, while the human population (and other larger mammals) would have occupied a separate biome at a higher elevation, well above the swamplands. There mankind established the first civilization, building cities and pursuing scientific endeavors like metallurgy (Genesis 4:22). As the destructive waters of Noah’s flood progressively rose, waves carrying sediments would have first buried the low-lying areas. Higher waves, as well as erosion and mudslides, would have swept away and then buried the mammals living on the upper biome.  This could be the key reasons why there is a general pattern in the fossil record of dinosaurs and other reptiles being buried in a layer below the larger mammals. 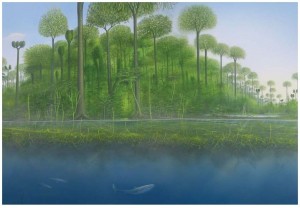 Of course, there also would have been a vast ocean biome on the early earth surrounding the original continent. But it is also likely that there was a special biome existing between the open sea and the land. For many years (starting with Otto Kunze in 1884) scientists have proposed the concept of an ancient floating forest. After studying Carboniferous coals, Joachim Scheven proposed that such a floating forests represented a unique ecosystem, dominated by arboreal lycopods, a massive drifting 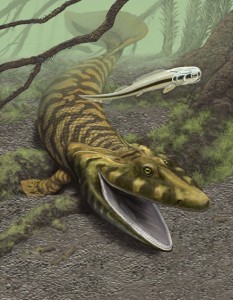 island of plant-life characterized by intertwining root systems. (Scheven, J., “The Carboniferous floating forest—an extinct pre-Flood ecosystem,” Journal of Creation 10(1):70–81, 1996.) The fossil evidence is abundant in Northern Hemisphere coal beds, where preserved plant forms feature hollow trunks or stem structures along with symmetrical and radial root systems, characteristic of plants that today float on water. These vast floating rafts of vegetation would have been beached and deposited in successive tsunami flows during the Flood. If there were millions of square miles of such floating forest, it would easily account for the vast coal deposits around the world. Creationist Kurt Wise elaborated further on the floating forest model, proposing that they flourished in an intercoastal waterway at the margin of the continents. The size of this forest would support an interior fresh water ecosystem where specially designed fish could move along the bottom by using leg-like fins, similar to those featured on the creature Tiktaalik. (Wise, Kurt, P., “Sinking a Floating Forest,” Creation Magazine, October, 2003, pp. 40-43.)