The “Mokele-mbembe” of the Congo 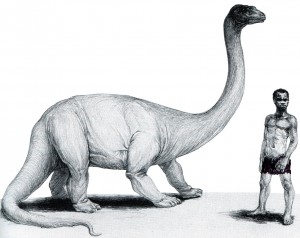 “In the swampy jungles of western Africa, reports persist of an elephant-sized creature with smooth, brownish-gray skin, a long, flexible neck, a very long tail as powerful as a crocodile’s, and three-clawed feet the size of frying pans. Over the past three centuries, native Pygmies and Western explorers have told how the animals feed on the nutlike fruit of a riverbank plant and keep to the deep pools and subsurface caves of waters in this largely unexplored region. After a recent expedition there, two American researchers conclude that these stories refer to a real animal, not a myth. Fantastic as it seems, Roy Mackal [University of Chicago] and James Powell believe that this creature, called ‘Mokele Mbembe’ by the natives, may actually be a dinosaur, perhaps one resembling brontosaurus, which is thought to have died out 70 million years ago.” (Anonymous, “Living Dinosaurs,” Science-80, vol. 1, November 1980, pp. 6-7.) Roy Mackal’s research regarding the Mokele-mbembe led him deep into the central swamps of the Congo. He returned with a numerous credible reports and a historic footprint photo (bottom left). Dr. Mackal wrote a book entitled Living Dinosaur? about his multiple trips and on page 225 he displays a picture of what he believes the creature looked like (above left).

Below is a carving that showed up in a souvenir shop in the Congo in the 1980s. The indigenous artist was clearly trying to depict a long-necked, long-tailed animal. Notice that it seems to be herbivorous (no sharp teeth depicted). The stubby feet match up well with the appendages of a sauropod dinosaur, though the legs are quite short. It has a curious frill down the back, much like the spikes many paleontologists think sauropods like Diplodocus sported. There is no depiction of an ear, an accurate representation of a dinosaurian reptile. The piece is 15″ long and stands 6″ tall. 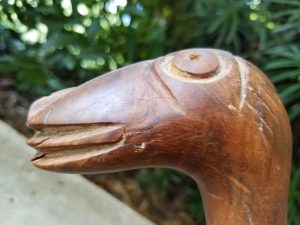 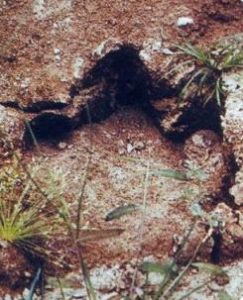 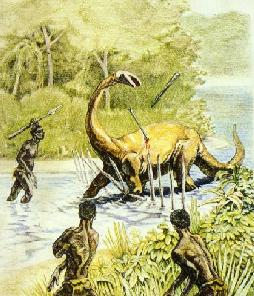 Likouala swamp region, located in the northern part of the Congo, covers an area of about 49,000 square miles, roughly the size of the state of NY. It was not until missionaries showed natives a sauropod dinosaur that they identified this mysterious animal living along the rivers and deep swamp pools. A vegetarian, the creature will fight with hippos over a territory rich in molombo plants. The Sunday Times of London reported in May of 1999 that members of the Kabonga tribe actually killed a Mokele-mbembe! In the fall of 1981 Herman Regusters led a team into Lake Tele and returned with droppings, footprint casts and sound recording unlike any animal known to the Congo Basin area. (Listen for yourself) Reports of Mokele-mbembe go all the way back to the eighteenth century and in 1919, the Smithsonian sent a team to investigate. Since 1980, over 25 such expeditions have searched for the mysterious monster!