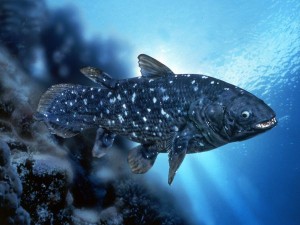 The term Cryptozoology was popularized by zoologist, Bernard Heuvelmans. It was first used in print when Lucien Blancou dedicated his 1959 book Geographie cynegetique du monde to Huevelmans. The term has now become a standard part of modern vocabulary and appears in almost all dictionaries. It is defined as “the science of hidden animals.” It combines the three Greek words: kryptos, zoon and logos, which mean, respectively: hidden, animal, and discourse. There are a number of species that were thought to be extinct that have been found in recent history. Some of these formerly “hidden creatures” include the megamouth shark and the coelacanth. In 1976, a naval research vessel working in the Hawaiian Islands caught a previously unknown animal when it hauled in its large anchor. The 1,653 pound shark was called “megamouth” because of its large, toothy oral cavity. The coelacanth (photo on right) was supposed to have been extinct for 70 million years until a fisherman caught one in 1938. In the last decade new species of deer, lemur, and marmoset have been found. Only discovered by western science in 1992, the Saola, or forest-dwelling ox, is so different from any previously known species that a separate genus has had to be constructed. The giant squid that attacked sailing ships in the annals of ancient maritime lore was believed by many to be mythological. Numerous modern research efforts have tried to substantiate its existence. But in the fall of 2004 a live giant squid (Architeuthis) measuring roughly 25 feet (8 meters) long attacked a baited fishing line off the Ogasawara Islands. (Owen, James, National Geographic News, September 27, 2005.) Japanese scientists released still pictures of the bus-sized creature with eyes as large as dinner plates. Other significant finds in recent years include a new species of monitor lizard discovered in the Philippines (Welton, et al., “A Spectacular New Philippine Monitor Lizard Reveals a Hidden Biogeographic Boundary and a Novel Flagship Species for Conservation,” Biology Letters, 2010, pp. 654–658.) and a previously undescribed species of giant peccary found in South America (Van Roosmalen, et al., “A New Species of Living Peccary from the Brazilian Amazon,” Bonner Zoologische Beiträge 55, 2006.) 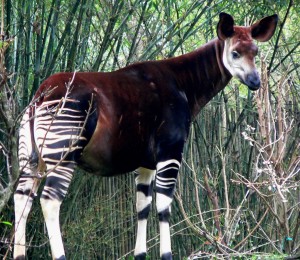 Although cryptozoology is not yet taught as an official discipline in universities, the word “cryptozoology” can be found in scientific articles, and in many encyclopedias. A cryptozoologist is one who systematically seeks to track down species or sub-species that are still unknown to science. French cryptozoologist Michel Raynal developed from Heuvelmans a methodology for how the existence of a particular kind of plant or animal can be established on testimonial evidence (reported sightings), circumstantial evidence (indirect evidence like footprints), or even autoptical evidence (things that can be collected and observed like droppings or a hide). While skeptics are dubious of this kind of evidence, it would be well to remember that it was not that many years ago that the elusive creature we now call Okapi (pictured on right) was only known to science through the stories of tribal peoples. Cryptozoologists not only seek to establish the existence of famous “hidden creatures,” like the Loch Ness Monster or Big Foot, but also pursue stories of common animals in unexpected places and new varieties of plants.