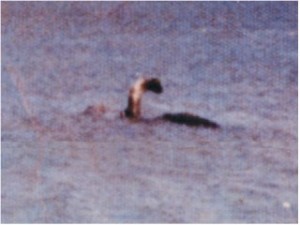 The famous photo of the Lake Champlain monster (to the right) was taken by Sandi Mansi in 1977 as her family was enjoying a picnic near the lake. Hundreds of people, dating all the way back to the Abenaqi Indians, claim to have seen the creature. Lake Champlain is a very deep, 125 mile long waterway that forms the border between the states of NY and VT. It is accessed by sea through the St. Lawrence Seaway and this entire region is thought to have been the “Champlain Sea” at the end of the Ice Age. The first recorded sighting of the monster took place when Samuel de Champlain came upon the lake in July of 1609. During this expedition, the French explorer noted in his journal the sighting of “a 20-foot serpent, with a horse-shaped head and body as thick as a keg.” Some have claimed that Champlain only saw a gar pike, whose alligator snout and 6 ft length make them look like a sea monster. Since that time, sightings of a strange aquatic beast in the lake have been reported by over 600 people, many documented in Joseph Zarzynski’s definitive 1984 book Champ–Beyond the Legend. 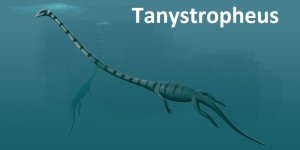 “Dennis Hall has personally encountered the creature on several occasions and has obtained several photographs and videotaped evidence. In fact, Dennis may be the only person to have ever captured a Champ specimen. In the 1970s Dennis discovered an unusual looking 12-inch-long reptile in a marshy area bordering the lake. The creature looked like no other living reptile and possessed a strange forked tongue. Upon inspecting the creature Dennis’ father thought the beastie strange enough to be worthy of examination by the scientists at the University of Vermont who indicated that it was unlike any living reptile in the catalog. Like many a cryptozoological creature, this one was somehow lost thereby ensuring that the monster would remain an enigma. Dennis Hall subsequently saw what he thought was the spitting image of the creature he once possessed in a book on prehistoric reptiles. Tanystropheus, extinct for millions of years, appeared to be the long-lost twin of Hall’s 12-inch specimen. Considerably larger and with a fairly long neck, Tanystropheus enjoyed a semi-aquatic existence much like Champ.” (Kirk, John, In the Domain of the Lake Monsters, 1998, pp. 132-133.) 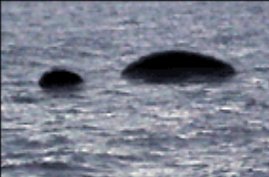 Perhaps the most intriguing evidence for Champ’s existence comes from underwater recordings. In 2003 a team doing research for the Discovery Channel picked up a high-pitched ticking and chirping noise like what a dolphin or whale makes. Obviously these creatures would not be in freshwater, many miles away from the ocean. Featured on the TV program Unsolved Mysteries, Champ has been amateur video-taped several times (see picture to the right). On February 22, 2006 ABC News 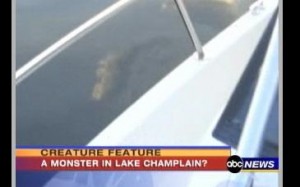 obtained an exclusive video of something just under the surface of the lake that some say may be Champ. The video, including humps and what appears to be a long slender neck and monster head (see on left), was taken by two fishermen with their digital camera. Before their supposed sighting, they were Champ skeptics. ABC News has since removed the original video from their website and replaced it with an unrelated, low quality video of Lake Champlain, but it can still be seen on this YouTube video.

In 1993 a Japanese team searched the entire lake with 15 boats and multiple helicopters. They came back with a sonar report of a very large object (about 20 ft long) having passed under them. More recently, Dennis Hall teamed up with Katy Elizabeth in a research initiative that they called Champ Search. They set up a hydrophone underwater system to listen to sounds in the lake. On July 31, 2014 the monster hunters electronically captured loud, deep sounds in a region called Scotch Bonnet, providing some of the most compelling scientific evidence to date of the unknown aquatic animal. Check out this strange Champ Sound. Many people believe Champ to be a living plesiosaur.

Genesis Park staff has spent many hours on Lake Champlain, both from boats on the water and from shore vantage points where Champ has purportedly been seen. Eye witnesses were interviewed. In some cases local residents have had sightings, but have been hesitant to go public. Based on these firsthand investigations, we feel that this lake deserves continued research. If more people are alert, the possibility of a breakthrough photo or video becomes quite promising.