Before the modern days of noisy powered ships, sailors regularly reported encounters with sea monsters. See the Dragons in History page. But even today rumors persist of sea serpents and large plesiosaur-type creatures living in the ocean depths. Probably the most-respected “sea serpent” story involves the Cadborosaurus (“Caddy”) which has been observed numerous times off the coast of British Columbia. Native peoples of the Pacific Northwest memorialized important animals in rock carvings. The petroglyph on the top right is from the Nanaimo Petroglyph Park. The lower one 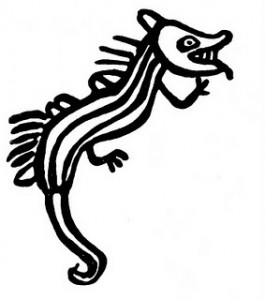 is traced from a large rock near Sproat Lake on Vancouver Island, British Columbia (Drawing after Indian Rock Carvings, by Beth Hill, Hancock House Publishers, 1980, p.22.) On November 22, 1934 a report came out of Prince Rupert: “The remains of a strange marine monster thirty feet in length resembling the description of sea serpents which have been previously reported in British Columbia was brought here from Henry Island by Dr. Neal Carter, director of the Prince Rupert Dominion Fisheries Experimental Station. The body was so badly decomposed it was impossible to preserve it intact.” (Gaal, Arlene, In Search of Ogopogo, p. 85.) In 1947 a snakelike creature was found by four fishermen wedged between two boulders off the British Columbia coast. The skull was one foot wide and resembled a horse or camel.

A young Caddy was allegedly captured by Captain Hagelund, a retired whaler who was yachting in Pirate’s Cove, DeCourcy Island. 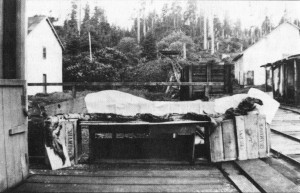 Towards evening they saw a disturbance in the cove and managed to net an eel-like creature with big eyes, a hooked snout, sharp teeth, flippers, and a spade-like tail. Hagelund examined the creature, drew a sketch (upper left) and then released it out of pity. (LeBlond, and Bousfield, Cadborosaurus: Survivor from the Deep, 1995, p. 57-59.) Professor LeBlond of the University of British Columbia presented a paper giving a formal description of the Cadborosaurus willsi to the Canadian and American Societies of Zooloogy based on photographic evidence. He cited a 3-meter carcass of an apparent juvenile that was discovered in the stomach of a sperm whale as proof that the sea serpent exists. The photo (from 1937) of this corpse (shown right) is courtesy of the British Columbia Scientific Cryptozoology Club, copyright 1995. 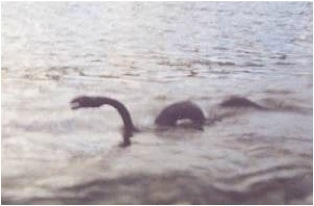 Long before Loch Ness became famous, the beautiful Argentine Andes Lake Nahuel Huapi was known for the cryptid that inhabited its depths. (Costello, Peter, In Search of Lake Monsters, 1975.) Nahuelito is named after the lake which covers 318 sq. miles at the foot of the Patagonian mountains. Fossilized skeletons of the ichthyosaur (like that on the right) have been found near Bariloche not far from the lake, leading some to assign this identity to the cryptid. Others believe it is more like a sea serpent, a theory supported by photos taken in 2006 and published in El Cordillerano Edicion of Argentina (see left). Supposedly, Nahuelito has been visible for several minutes on the surface of the lake and has been sighted by scores of tourists and locals. Estimates of the creature’s length range from 15 ft. and upwards. 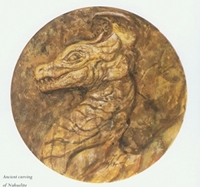 As early as 1897 Dr. Clementi Onelli (Director of the Buenos Aires Zoo) had been receiving reports of an unknown creature which left huge tracks and crushed bushes and undergrowth leading to the lake shore. An American gold prospector named Martin Sheffield told in his reports of Argentina of an animal with a huge neck like a swan which moved with a body like that of a crocodile. An expedition, which was led by Jose Cihagi, superintendent of the zoo, was unsuccessful in locating Nahuelito, causing Leonard Matters in the July 1922 issue of Scientific American to conclude that the plesiosaur, “if it ever existed, appears to have fled to parts unknown.” To the right is a depiction of an ancient carving of Nahuelito showing a horned reptilian form (from Eggleton & Suckling, The Book of Sea Monsters, 1998, p. 90.) About 1910 George Garrett was managing a company on Lake Nahuel Huapi when he had the following encounter:

“…we were beating windward up an inlet called ‘Pass Coytrue,’ which bounded the peninsula. This inlet was about five miles in length, a mile or so in width, and of an unfathomable depth. Just as we were near the rocky shore of the peninsula, before tacking, I happened to look astern towards the centre of the inlet, and, to my great surprise, I saw about a quarter of a mile to leeward, an object which appeared to be 15 or 20 feet in diameter, and perhaps six feet above the water. After a few minutes, the monster disappeared. On mentioning my experience to my neighbours, they said the Indians often spoke of immense water animals they had seen from time to time.” (Toronto Globe, April 6, 1922.) 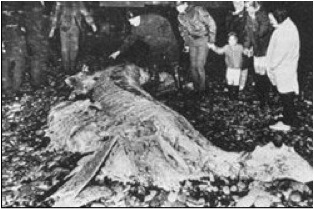 The Great Lakes in north America have had more than their fair share of sea monster stories, including a photo of “Bessie” taken in 1991 by John Kraft. Not to be outdone by their friends in Scotland, the Irish have reports of a eel-like monster called Pieste. Some of the larger bodies of water (like Lough Fadda, Ree and Nahooin), have been investigated after monster reports surfaced from credible witnesses. Then there is Memphre, the mysterious creature of Lake Memphremagog, on the Vermont-Quebec border that has been observed since the 1800s. What has been reported as a plesiosaur has also been repeatedly sighted in Bynoe Harbor near Darwin, Australia. It is said to be depicted in Aborigine cave paintings in the north. The corpse pictured to the right washed ashore on Mann Hill Beach in Plymouth, MA during November of 1970. Described by one eyewitness as a “camel without legs” this carcass has confounded investigators for decades. It was said to be about 20 ft long, weighing approximately 2 tons and closely resembled a plesiosaur. 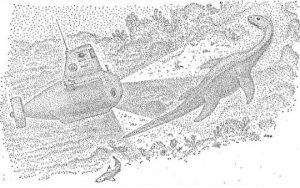 The submersible research vessel Alvin encountered a sea monster on July 20th, 1965, while making a dive in the Bahamas. Pilot Captain Marvin McCamis and Captain Bill Rainnie stated that as their mini-sub reached a depth of around 5000 feet, they came upon a crevasse that extended an additional 300ft deeper than the ocean floor. They began to descend into the crevasse when the Captain noticed something moving in front of them, a large object moving that was moving towards them. McCamis watched as it came closer. To his surprise, he was able to make out a living creature that was swimming in their direction. Both McCamis and Rainnie stated that the large creature possessed an extremely long neck and a snakelike head with two large eyes staring in their direction. The body was quite thick and possessed four large flippers, two on each side, that propelled the creature smoothly through the water. The creature, which appeared startled by presence of the sub, swam up from the crevasse in what appeared to be an attempt to distance itself from the Alvin. The drawing to the left is based on their description. McCamis and Rainnie watched as the large creature swam upwards with its back turned. McCamis tried to move the Alvin into a position to photograph the retreating creature, but by the time the sub had completed its adjustment, the creature was out of range. Captain McCamis was later assigned the title of chief engineer and pilot for the Alvin project at the Woods Hole Oceanographic Institute, and eventually received a Meritorious Service Award from the Secretary of the Navy. Captain Bill Rainnie received multiple commendations as well as Navy merit service awards for his leadership roles and deep submergence missions. There is no reason that these two men lie about what they had seen.

Reports surfaced in the mid 1990s of a monster in Lake Van, a large alkaline lake in eastern Turkey. In 1997 Unal Kozak took an amateur video of the creature, which is purported to be over 40 ft long and sports spikes down its back. There are now over 1,000 eye witnesses claiming to have seen the plesiosaur-like beast! Other speculative stories about USO’s (Unidentified Swimming Objects) abound from England, Iceland, Sweden, Russia, France, and Japan. Could some of these creatures be plesiosaurs as well?