Deep in the bush of east central Africa, lives a beaked, flying creature called the Kongamato. This fascinating animal first received widespread attention when explorer Frank Welland described it in his 1932 book In Witchbound Africa. The Kongamato (“overwhelmer of boats”), is described as a large, reddish creature with leathery wings, devoid of feathers. Eyewitnesses who are shown an illustration of the pterodactyl unanimously agreed to this identification of the Kongamato. “The evidence for the pterodactyl is that the natives can describe it so accurately, unprompted, and that they all agree about it. There is negative support also in the fact that they said they could not identify any other of the prehistoric monsters which I showed them…The natives do not consider it to be an unnatural thing like a mulombe [demon] only a very awful thing, like a man-eating lion or a rogue elephant, but infinitely worse… I have mentioned the Jiundu swamp [northwestern Zambia] as one of the reputed haunts of the kongamato, and I must say that the place itself is the very kind of place in which such a reptile might exist, if it is possible anywhere.” (Welland, 1932, pp. 238, 240.) 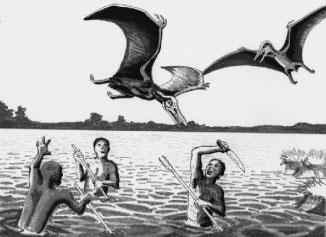 “The Kaonde people of the North-Western Province [of Zambia] used to carry charms called ‘muchi wa Kongamato’ to protect them at certain river crossings from the Kongamato”…The creature was described by the Kaonde of old as a huge red lizard with membranous wings like a bat spreading five or more feet, and with teeth in its huge beak. In the 1920’s, Headman Kanyinga from the Jiwundu Swamp area near the Zairean border instantly identified as Kongamato a picture of a pterodactyl…Nevertheless, as recently as 1958, the science journalist Maurice Burton wrote in the Illustrated London News in 1958 that there had been several reports form Africa of a pterodactyl-like creature, with speculation that the Bangweulu Swamps might be one of its habitats. He pointed out that off the coast of Africa, the coelacanth, a deep sea contemporary of the pterodactyl, had been caught by fisherman…” (Hobson, Dick, Tales of Zambia, 1996, p. 149.)

“Though dragons have completely dropped out of all modern works on natural history, they were still retained and regarded as quite orthodox until a little before the time of Cuvier;…For instance, Pigafetta, in a report of the kingdom of Congo (The Harleian Collections of Travels, vol. ii, 1745, p. 457.) ‘gathered out of the discourses of Mr. E. Lopes, a Portuguese,’ speaking of the province of Bemba, which he defines as ‘on the sea coast from the river Ambrize, until the river Coanza towards the south,’ says of serpents, ‘There are also certain other creatures which, being as big as rams, have wings like dragons, with long tails, and long chaps, and divers rows of teeth, and feed upon raw flesh. Their colour is blue and green, their skin painted like scales, and they have two feet but no more. The Pagan negroes used to worship them as gods, and to this day you may see divers of them that are kept for a marvel. And because they are very rare, the chief lords there curiously preserve them, and suffer the people to worship them, which tendeth greatly to their profits by reason of the gifts and oblations which the people offer unto them.’ And John Barbot, Agent-General of the Royal Company of Africa, in his description of the coasts of South Guinea, (Churchill, Collections of Voyages, 1746, p. 213.) says: ‘Some blacks assuring me that…there are winged serpents or dragons having a forked tail and a prodigious wide mouth, full of sharp teeth, extremely mischievous to mankind, and more particularly to small children.’ He describes it as having two feet armed with claws, and two ears, with five prominent and conspicuous tubercles on the back. The whole was ornamented with green and dusky scales.  Above, it bore wings fit for flight, and had a long and flexible tail, coloured with yellowish scales, such as shone on the belly and throat.  The mouth was provided with sharp teeth, the inferior part of the head, towards the ears, was even, the pupil of the eye black, with a tawny surrounding, and the nostrils were two in number, and open.” (Gould, Charles, Mythical Monsters, W.H. Allen & Co., London, 1886, pp 201-202.)

Dr. J.L.B. Smith (famous for his investigation into the living fossil, the coelacanth) wrote in his 1956 book Old Fourlegs about flying dragons that lived near Mount Kilimanjaro, Tanzania. “…one man had actually seen such a creature in flight close by at night. I did not and do not dispute at least the possibility that some such creature may still exist.” (Smith, J.L.B., Old Fourlegs, 1956, pp. 108-109.) Indeed a game warden named A. Blaney Percival stationed in Kenya noted “…the Kitui Wakamba tell of a huge flying beast which comes down from Mount Kenya by night; they only see it against the sky, but they have seen its tracks; more, they have shown these to a white man, saying, he could make nothing of the spoor, which betrayed two feet,and an apparently, heavy tail.” (Percival, A Game Warden on Safari, London, 1928, p. 241.) In Kenya the same creature is called “Batamzinga.”

A very credible account was described in 1956 by engineer J.P.F. Brown near Lake Bangweulu, Zambia and reported in the April 2, 1957 Rhodesia Herald. Brown was driving back to Salisbury from a visit to Kasenga in Zaire. He stopped at a location called Fort Rosebery, just to the west of Lake Bangweulu to get his canteen from the trunk. It was about 6:00 p.m. when he saw two creatures flying slowly and silently directly overhead. He observed that they looked prehistoric, with a long tail and narrow head. He estimated a wingspan of about 3-3 1/2 feet. One of them opened its mouth in which he saw a large number of pointed teeth. Further reports of such odd flying creatures come from the Awemba tribe that claims they live in caves in cliffs near the source of the great Zambezi River. In 1957, at a hospital at Fort Rosebery (the same location J. P. F. Brown had reported seeing strange flying creatures the year before) a patient came in with a severe wound in his chest. The doctor asked him what had happened and the native claimed that a great bird had attacked him in the Bangweulu swamps. When asked to sketch the bird, the native drew a picture of a creature that resembled a pterosaur. In 2010, Genesis Park staff mounted an exploratory trip deep into the Bangweulu Swamp. Zambian fisherman were interviewed and all-night vigils were conducted. But no definitive evidence for the existence of the Kongamato was obtained. 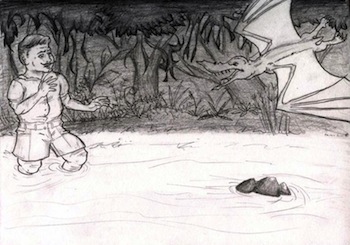 To the west in Cameroon, the natives describe a nocturnal, bat-like creature called Olitau. Likely the same as the Kongamato, this creature was observed by an exploration team under Ivan Sanderson in 1932. He drew a sketch of the episode (right). Modern reports of the Kongomato continue to surface. In 1998 Steve Romandi-Menya, a Kenyan exchange student living in Louisiana, declared that the Kongomato is still known to the bush-dwelling people in his country. The creatures are said to feed on decomposing human flesh, digging up bodies if they are not buried to sufficient depth.

In 1942 Captain Charles R.S. Pitman wrote a nearly 300 page volume describe the fauna of Uganda and the surrounding regions in great detail. He records the natives superstitious fear of looking upon the wailing tree hyrax at night lest they die (even though they were not afraid to capture the animal in daylight). He then discusses another animal that the natives described. “When in Northern Rhodesia I heard of a mythical beast, alleged to have a similar death-dealing attribute, which intrigued me considerably. It was said to haunt formerly, and perhaps still to haunt, a dense, swampy forest region in the neighbourhood of the Angola and Congo borders. To look upon it too is death. But the most amazing feature of this mystery beast is its suggested identity with a creature bat- and bird-like in form on a gigantic scale strangely reminiscent of the prehistoric pterodactyl. From where does the primitive African derive such a fanciful idea?” (Pitman, C.R.S, A Game Warden Takes Stock, 1942, pp. 202-203.)