Over the years a large number of fossilized human tracks have been reported at various locations around the world. Some of these shed light on the coexistence of men and dinosaurs. The Paluxy River basin in Glen Rose Texas is the location of Dinosaur Valley State Park. Many dinosaur tracks have been found along the river and a large number have been excavated to preserve them from erosion. But there have also been human tracks found in this same rock layer. To the right is the Willet print, which was excavated from a limestone ledge near Dinosaur Valley State Park. Below to the left is the Feminine Print, a “human track inside a dinosaur track,” that was found in the Paluxy River area of Glen Rose, Texas. In the center is the Delk Print, which shows a human footprint intruded by a tridactyl dinosaur print. The Delk Track has been authenticated by spiral CT scan, which can verify that there is greater compression density below the tracks then elsewhere in the rock. The right picture shows what are called “following contours” revealed by the CT scan. These would not be there if the track was carved. These Paluxy “man-tracks alongside dinosaur-tracks” have been the source of considerable controversy over the years. 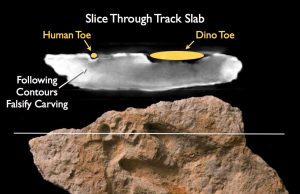 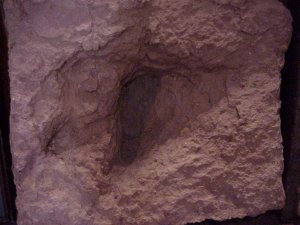 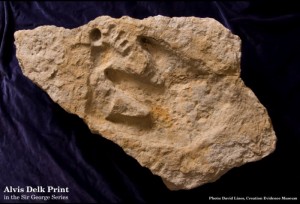 Originally the Paluxy ichnofossils (or trace fossils) were considered by creationists to be powerful evidence that men and dinosaurs coexisted. In the 1980s John Morris wrote the popular book Tracking Those Incredible Dinosaurs (and the People Who Knew Them) and the film “Footprints in Stone” was produced by Stan Taylor. Over time, the exposed prints became quite eroded and evolutionists argued that they were merely elongated dinosaur footprints that had experienced infilling. Some creationists are now inclined to agree that the famous Taylor Trail was made by a dinosaur, though some point to the mixture of human and dinosaur characteristics as evidence that the tracks are a composite, the human track superimposed upon the existing dinosaur footprints. (See Robert Helfinstine and Jerry Roth’s 1994 book Texas Tracks and Artifacts.) 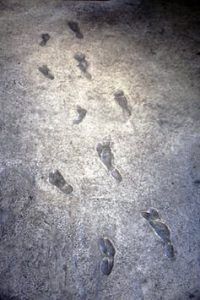 The lack of clarity regarding these original Paluxy “man-tracks” finds prompted leading creationists to cease using the Paluxy footprints as evidence for men living dinosaurs. But then additional tracks, like the Feminine Print and the Delk Track, came to light, providing much clearer evidence. It is instructive to consider that these Paluxy human footprints are much more distinct than Mary Leakey’s famous Laetoli Track in Tanzania (left), which is universally accepted as hominid. The limestone beds of the Paluxy River containing the supposed human and dinosaur footprints are thought by evolutionists to be 120 million years old. Milne and Schafersman admit, “Such an occurrence, if verified, would seriously disrupt conventional interpretations of biological and geological history and would support the doctrines of creationism and catastrophism.” (Milne, and Schafersman, “Dinosaur Tracks, Erosion Marks and Midnight Chisel Work (But No Human Footprints) in the Cretaceous Limestone of the Paluxy River Bed, Texas,” Journal of Geological Education, Vol. 31, 1983, pp. 111-123.) Incidentally, the Laetoli prints are also problematic for evolutionists because they appear fully modern and yet the rock layer is dated to 3.5-3.7 million years ago, too old for modern Homo sapiens in the current paradigm of human evolution. 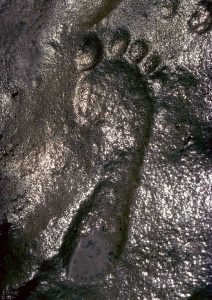 To the right is pictured the Zapata track, found in Permian limestone in New Mexico. The Permian is thought by evolutionary geologists to be over 250 million years old. Yet there is a clear fossil human footprint. It is a very shallow track, almost invisible unless wet with strong side lighting. This accounts for the dramatic hour glass shape with dots in front, similar to what you see when you walk with a wet foot on a tile floor. Geologist Don Patton attempted to cut this print out of the rock, but wore out four carborundum blades trying to make one cut! Patton reports to have personally seen a photograph of four, virtually identical tracks in an obvious right left pattern taken about one quarter mile from the Zapata track. The rock and the tracks look virtually identical. Some critics claim the Zapata print is “too perfect.” But the mud push-up on the sides and the fact that the matrix proved extremely hard to cut out (lab tests indicated it was limestone with 30% silica) would make a carving quite unlikely.

In 1987, not far from the Zapata track site, paleontologist Jerry MacDonald discovered a variety of beautifully preserved fossil footprints in Permian strata. The Robledo Mountain site contains thousands of footprints and invertebrate trails that represent dozens of different kinds of animals. Because of the quality of preservation and sheer multitude of different kinds of footprints, this tracksite has been called the most important Early Permian sites ever discovered. Some that have visited the site remark that it contains what appears to be a barefoot human print. “The fossil tracks that MacDonald has collected include a number of what paleontologists like to call ‘problematica.’ On one trackway, for example, a three-toed creature apparently took a few steps, then disappeared–as though it took off and flew. ‘We don’t know of any three-toed animals in the Permian,’ MacDonald pointed out. ‘And there aren’t supposed to be any birds.’ He’s got several tracks where creatures appear to be walking on their hind legs, others that look almost simian. On one pair of siltstone tablets, I notice some unusually large, deep and scary-looking footprints, each with five arched toe marks, like nails. I comment that they look just like bear tracks. ‘Yeah,’ MacDonald says reluctantly, ‘they sure do.’ Mammals evolved long after the Permian period, scientists agree, yet these tracks are clearly Permian.” (“Petrified Footprints: A Puzzling Parade of Permian Beasts,” The Smithsonian, Vol. 23, July 1992, p.70.) 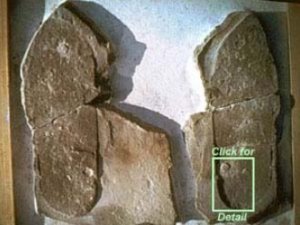 To the left is the “Meister Print,” found in Utah within a block of shale. It was first publicized in the CRS Quarterly as the footprint containing a trilobite fossil. Bottom left is a fossilized shoe sole found petrified in Triassic rock. This print specimen is so clear that the threads are visible to the naked eye! Also published in this journal is the 1995 study of quasihuman ichnofossils (supposed human tracks) found with tracks of dinosaurs in strata near Tuba City, Arizona. Photomicrographic analysis indicates that the human-like impressions were created by pressure which created relatively smooth surfaces, unlike the rougher surfaces of impressions formed inside concretions and unlike surrounding surfaces. Comparison of the quasihuman ichnofossils with modern tracks in wet mud shows them to be closely comparable, supporting their theory that the fossil imprints were made by human feet. (Auldaney, Rosnau, Back, and Davis, CRS Quarterly, vol. 34, pp. 133-146.)

In 1983 Professor Amanniyazov, Director of Turkmenia’s Institute of Geology, reported what appeared to be human footprints in Mesozoic strata. “This spring, an expedition from the Institute of Geology of the Turkmen SSR Academy of Sciences led by found over 1,500 tracks left by dinosaurs in the mountains in the south-east of the Republic. Impressions resembling in shape a human footprint were discovered next to the tracks of the prehistoric animals.” (Rubstsov, “Tracking Dinosaurs,” Moscow News, No. 24, p. 10, 1983.) Dr. Amanniqazov was shocked beyond belief to find a human footprint mingled with dinosaurs. He discusses one of the footprints and says: “if we speak of the human footprint, it was made by a human or a human-like animal. Incredibly, this footprint is on the same plateau where there are dinosaur tracks. We can say the age of this footprint is not 5 or 10, but at least 150 million years old. It is 26cm long, that is Russian size 43 EEE [9.5 American], and we consider that whoever left the footprint was taller than we are…this would create a revolution in the science of man.” (Amanniyazov, Kurban, Science in the USSR T 986, “Old Friends Dinosaurs,” p. 103-107.) There is also this fascinating quote from the Russian journalist, Alexander Bushev who investigated these trackways: “But the most mysterious fact is that among the footprints of dinosaurs, footprints of bare human feet were found…We know that humans appeared much later than dinosaurs – that there was an extraterrestrial who walked in his swimming suit along the sea side.” (Bushnev, Alexander, Komsomolskya Pravda, January 31, 1995, p. 61ff.) 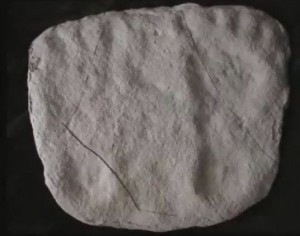 Perhaps the most intriguing such fossil footprint report was that made by the head of department at Berea college in Kentucky of a human-like track left in sandstone of the Upper Carboniferous Period. Numerous scientists have investigated these tracks and concluded that they are genuine (even going so far as to count the sand grains under magnification to ensure that it was compressed at the bottom rather than carved). In Scientific American, geologist Albert G. Ingalls writes, “If man, or even his ape ancestors, or even that ape ancestor’s early mammalian ancestor, existed as far back as the Carboniferous Period in any shape, then the whole science of geology is so completely wrong that all the geologists will resign their jobs and take up truck driving. Hence, for the present at least, science rejects the attractive explanation that man made these mysterious prints in the mud of the Carboniferous with his feet.” Ingalls suggested that they were made by some unidentified amphibian. But a human-sized Carboniferous amphibian is just about as problematic for evolutionary timetables as humans in that era!

However, in an attempt to dismiss these tracks, the Scientific American article did not include the real photos in their article, instead showing some pretty obvious fakes (probably Indian carvings) and not the actual prints, which they had access to. Why would they not show the real tracks? Because this evidence is highly problematic to their worldview, the theory of evolution. As evolutionary atheist Richard Dawkins observed, authenticated evidence of humans in the Carboniferous would “blow the theory of evolution out of the water.” (Dawkins, Free Inquiry, vol. 21, no. 4, 2001.)