Although no human skeletons have been found fossilized alongside the dinosaurs, many “modern” animals (which evolutionists had thought to have evolved millions of years later) have been found buried in the same rock layer with the dinosaurs.  Finding advanced creatures like a platypus or beaver-like mammals preserved with the dinosaurs presents difficulties for evolution but is in complete harmony with the creation account in Genesis.  “J.B.S. Haldane famously retorted, when asked to name an observation that would disprove the theory of evolution, ‘Fossil rabbits in the Precambrian!’” (Dawkins, Richard, The Greatest Show on Earth: The Evidence for Evolution, 2009, p. 147.) While certainly not Precambrian, a fossilized rabbit discovered in India is supposed to be 53 million years old, quite close to the time evolutionists think dinosaurs were still alive. (Handwerk, B., “Easter Surprise: World’s Oldest Rabbit Bones Found,” National Geographic News, March 21, 2008.)

But pollen grains have been found in Precambrian layers, rocks thought to have been laid down a billion years before pollen-producing plants were supposed to have evolved. “The rocks concerned are unquestionably ancient (Precambrian) and are so altered that no organic matter should be recognizable in them. Also they are physically dense, with no obvious routes (such as natural permeability/porosity or crack systems) through which solid particles might enter them. Yet standard palynological techniques recovered well-preserved fossil pollen from the samples!!!” (Stainforth, R.M. “Occurrence of pollen and spores in the Roraima Formation of Venezuela and British Guiana,” Nature 210:292–294, 1966.) The discovery of vascular wood and six-legged, composite-eyed insects in the Precambrian salt deposits of the Salt Range in Pakistan is also highly problematic for evolutionists. (Sahni, B., “Microfossils and the Salt Range Thrust,” Proceedings of the NAS, India, 1945, pp. i-xix.) and (Coates, J. et al., “Age of Saline Series in the Punjab Salt Range,” Nature 155, 1945, pp. 266-267.) 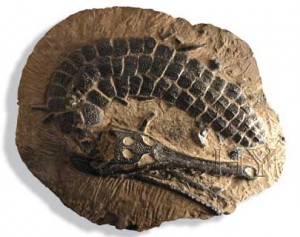 Even famous evolutionists, like Thomas Henry Huxley, have noted the strange fact that some creatures have changed very little from the time of the great Age of Reptiles. Huxley called these “persistent types.”  Charles Darwin coined the term “living fossils” to describe organisms that have remained largely unchanged for eons, with living forms appearing substantively identical to their ancestors that we find fossilized. It is generally agreed that modern reptiles, like turtles and crocodiles, are nearly identical to those we find preserved with dinosaur remains. The same can be said for some species of ferns, mosses, sharks, horseshoe crabs, cockroaches, sturgeon, paddlefish, dragonflies, cranes, pelicans, sea turtles, snails, the chambered nautilus and many, many more.

Paleontologists have found 432 mammal species in the dinosaur layers, almost as many as the number of dinosaur species.  Also many modern bird species have been discovered buried with dinosaur remains: “parrots, owls, penguins, ducks, loons, albatross, cormorants, sandpipers, avocets, etc.” (Batten, Don, “Living Fossils: a powerful argument for creation,” Creation 33 (2), 2011.) “This symphysis appears to represent the oldest known parrot and is, to my knowledge, the first known fossil of a ‘terrestrial’ modern bird group from the Cretaceous. The existence of this fossil supports the hypothesis, based on molecular divergence data that most or all of the major modern bird groups were present in the Cretaceous.” (Stidham, Thomas A., Nature 396, 29-30, November 5, 1998.) Such stasis (virtually no evolutionary change in these birds for 60 million years) is hard to fathom. It is evidence that both the dinosaurs and birds lived together much more recently. 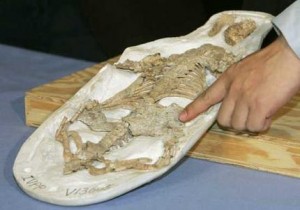 In 2005 researchers in China identified a small dinosaur known as Psittacosaurus amongst the stomach region of a fossilized furry mammal that resembled a Tasmanian devil. (Hu, Y. et al., “Large Mesozoic Mammals Fed on Young Dinosaurs,” Nature: 433, 2005, pp. 149-152.) To find such an advanced predatory mammal came as a surprise to these researchers. The evolutionists had long maintained that the only mammals alive at the time of the dinosaurs were very small, like the supposed human ancestor that resembled a squirrel!

It seems that the dinosaur rock layers contain fossils remains of a distinct ancient biome, a swampy ecosystems. Relatively few mammals thrive in such an environment today–small rodents, arboreal animals (like a shrew, squirrel or possum), and swimming weasels and beavers are examples. Yet those are the same kinds of animals that we find buried with the dinosaurs, many appearing quite like their modern counterparts.