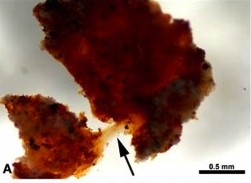 In 2004 the paleontologist Mary Schweitzer was examining in her lab a T-Rex bone taken from a canyon in Montana. She was shocked to discover soft, pliable tissue inside the bone! Later analysis revealed that it contained red blood cells and the unique hemoglobin protein. “This protein deteriorates very rapidly… surely if dinosaurs died millions of years ago, then any trace of this protein would be long gone. To find unfossilized dinosaur bone is already an indication more consistent with a young age for the fossils. …The evidence that hemoglobin has indeed survived: 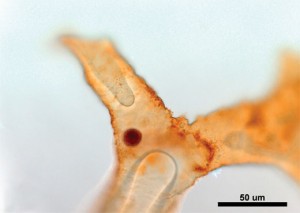 “Evidence of hemoglobin, and the still-recognizable shapes of red blood cells in unfossilized dinosaur bone is powerful testimony against the whole idea of dinosaurs living millions of years ago. It speaks volumes for the Bible’s account of a recent creation.” (Wieland, Carl, “Sensational Dinosaur Blood Report,” Creation Ex Nihilo, vol. 19, pp. 42-43, 1997.) But in 2008 evolutionists published a paper claiming that what appeared to be blood vessels was merely the result of more recent bacteria work, forming “endocasts” that followed the shape of where the original vessels lay, and that the red blood cells are actually iron-rich spheres called framboids. In May of 2009 Schweitzer’s team examined a fossil hadrosaur bone, taking extreme measures to ensure against contamination or misinterpretation. The results, published in the journal Science, bolster the original conclusion that the soft tissue (including collagens and amino acids) inside dinosaur bones is highly problematic for conventional interpretations of age.

In 2020, testing documented what seemed to be intact DNA in Hypacrosaurus bones. (Note the pink-stained DNA in the photo to the right.) To the left is a picture of dinosaur cells in the process of dividing. The center photo shows a darkening in the center of the cell that is consistent with the appearance of nucleic material. (Bailleul, et al., “Evidence of Proteins, Chromosomes and Chemical Markers of DNA in Exceptionally Preserved Dinosaur Cartilage,” National Science Review, 2020.) “However, even under the best preservation conditions at -5°C, our model predicts that no intact bonds (average length = 1bp) will remain in the DNA ‘strand’ after 6.8 Myr.” (Allentoft, M.E. et. al., “The Half-life of DNA in Bone,” Proceedings of the Royal Society B 279, 2012, pp. 4724-4733.) Paleontologists have described dozens of original, unmineralized tissues, including histone proteins and DNA in a T. Rex, bone collagen in a Jurassic Chinese sauropod, keratin protein in an Archaeopteryx bird, chitin and protein in Precambrian worm casings, etc. Yet experiments continue to confirm that such materials can last thousands, but not millions of years.

In April of 2013 the journal Nature published the report of an amazing discovery in Yunnan Province, China. Embryonic dinosaur remains contained complex organic structures. “In contrast to previous studies of organic residues based on extracts obtained by decalcifying samples of bone, our approach targeted particular tissues in situ.  This made it possible to detect the preservation of organic residues, probably direct products of the decay of complex proteins, within both the fast-growing embryonic bone tissue and the margins of the vascular spaces…. Previous reports of preserved dinosaur organic compounds, or ‘dinosaurian soft tissues’, have been controversial because it was difficult to rule out bacterial biofilms or some other form of contamination as a possible source of the organics.  Our results clearly indicate the presence of both apatite and amide peaks within woven embryonic bone tissue, which should not be susceptible to microbial contamination or other post-mortem artefacts.” (Reisz, Robert R., et. al., “Embryology of Early Jurassic Dinosaur from China with Evidence of Preserved Organic Remains,” Nature, vol. 496, 2013, pp. 210-214.)

Evolutionists have proposed far-fetched scenarios to attempt an explanation of biomolecules lasting for tens of millions of years. But regardless of any other environmental factor that would affect tissue preservation, radiation is still a major issue. Even if Schweitzer’s T. rex had died in a cooler, drier climate than the Hell Creek Formation, radiation would have degraded its body. “Bones absorb uranium and thorium like crazy. You’ve got an internal dose that will wipe out biomolecules.” (Yeoman, B., “Schweitzer’s Dangerous Discovery,” Discovery Magazine, April, 2006, pp. 37-41.)