While human skeletal remains in ancient strata have been identified (Corliss, William R. 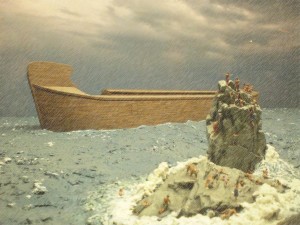 , Ancient Man: A Handbook of Puzzling Artifacts, 1978), none of these finds has been solidly established. It is to be expected that few such specimens would be found. The antediluvian civilization may have been fairly localized. Possibly there were cities, but most likely civilization was still mostly rural in nature. Probably there was greater ecological zone disparity than we see today. God might have provided extensive lowland swamps and even landlocked seas for optimal reptile habitat. Inland there would have been temperate high country optimal for mammals. We have evidence of massive waves crossing much of the continents, laying down the geological megasequences.  But huge tsunamis coming ripping through the region where people lived would have done more than just destroy and bury the original human civilization. It would have crushed the Ark as well. Thus God would have allowed the Flood waters to rise gradually there. This would have meant few fossils. People would have just drowned and become food for marine life or their carcasses would have rotted away. Buildings would have just collapsed under the pressure of the Flood waters. Ancient bricks would have dissolved. Receding Flood waters would have spread out and scattered the remains.

Indeed the intelligence and mobility of antediluvian men would have caused them to be moving to higher ground in the initial weeks of the Flood. The result would be even fewer bodies buried. Moreover, the explicit purpose of the Flood was to destroy that wicked civilization (Genesis 6:5-7), so it should be non big surprise that we haven’t found them in the rock layers. (Snelling, Andrew A., “Where are All the Human Fossils?,” Creation Ex Nihilo Technical Journal vol. 14, no. 1, December 1991- February 1992, pp. 28-33.) The lack of human fossils is actually more of a problem for evolutionists. If humans have lived on Earth for millions of years, there should be hundreds of millions of human fossils, not just a handful. Nonetheless, a few human fossil finds are potential candidates for pre-Flood classification.

The controversial Guadeloupe skeletons are a good example. These specimens were first brought to the attention of the creationist community by Bill Cooper (“Human fossils from Noah’s Flood,” Creation Ex Nihilo, vol. 5, no. 3, 1983, pp. 6-9). Several skeletons encased in limestone were discovered in 1805 near Moule on the island of Guadeloupe, and the island’s governor decided to excavate. At the time, no fossilized human bones had been documented. Eventually the 5 ft 2 inch skeleton of a female was taken (still encased in a 2 ton limestone block) to the British Museum of Natural History, where it was on display for 50 years. Initially, these skeletons were deemed to be very ancient, from the deluge in Noah’s day. In 1825 Cuvier and others reexamined the skeletons and determined that they were more modern. Today, that skeleton is being housed in the basement of the British Museum. According to the report of the excavators there are more skeletons remaining in the Miocene limestone strata east of the village of Moule. Important questions remain. Even though this limestone is as hard as marble, it formed around these skeletons rapidly, before they could fall apart. Current processes are not speedily building up this limestone on the island. In fact, it was the process of erosion that originally revealed the skeletons to the islanders. How could the unlikely process of rapid, recent limestone buildup happen in the interior of the island?

Although the entire island of Guadalupe had been surveyed geologically, the Clerc fossil site hadn’t been included in any geological surveys. So in 1985, geologist John Mackay went to the Island of Guadeloupe to clarify the assigned age of the fossil site. Mackay came away with a number of unanswered questions. But it seems clear that the matrix in which the Guadeloupe skeletons were found matches the Miocene deposits of the island. This age (23mya to 5mya in the conventional dating scheme) is a serious problem since modern humans were not supposed to have evolved in Africa till about 3 million years ago.

In the coal collection in the Mining Academy in Freiberg, there is a puzzling human skull composed of brown coal and manganiferous and phosphatie limonite, but its source is not known. Prof. Dr. R. Vulpius, Professor of Coal Geology at the Freiberg Mining Academy, confirmed in more recent times that the skull is still in the archives. This skull was described by Karsten and Dechen in 1842. (Otto Stutzer, Geology of Coal, 1940, p.271. Stutzer was Professor of Geology and Mineralogy in the School of Mines at Freiberg, in Saxony.) 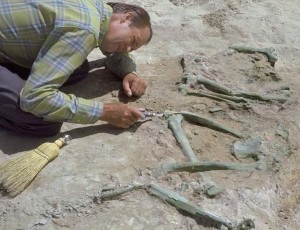 In June of 1971 Lin Ottinger, an amateur geologist and archaeologist, made a fascinating discovery in a Moab, Utah copper mine. Ottinger found human remains in a Cretaceous age sandstone (supposedly more than 65 million years old). He carefully uncovered a portion of what later proved to be two fossilized human skeletons. Dr. Marwitt, J. P. Professor of Anthropology at Utah University, pronounced the discovery “highly interesting and unusual” for several reasons. The bones were still joined together naturally and stained green with copper carbonate. (Burdick, C.L., “Discovery of Human Skeletons in Cretaceous Formation,” Creation Research Society Quarterly, vol. 10, no. 2, 1973, pp. 109-110.) “The bones were obviously human and ‘in situ,’ that is, in place and not washed or fallen into the stratum where they rested from higher, younger strata. The portions of the two skeletons that were exposed were still articulated indicating that the bodies were still intact when buried or covered. …In addition, the dark organic stains found around the bones indicated that the bones had been complete bodies when deposited in the ancient sandstone. …Mine metallurgist Keith Barrett of the Big Indian Copper Mine that owned the discovery site, recalled that the rock and sandy soil that had been removed by dozer from above the bones had been solid with no visible caves or crevices. He also remembered that at least 15 feet of material had been removed, including five or six feet of solid rock. This provided strong, but not conclusive, evidence that the remains were as old as the stratum in which they were found. And that stratum was at least 100 million years old.” (Barnes, F. A., “The Case of the Bones in Stone,” Desert, February 1975, pp. 36-39.) 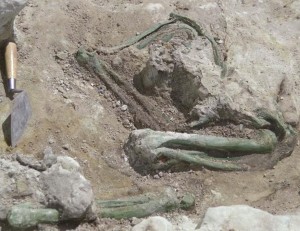 Since the above articles were published, additional specimens have been found in the same area (between 50-100 ft away). The original mining ceased in the 1970s because the hardened sandstone was tearing up the bulldozers. The specimens found in the 1990s were even deeper into the hillside. They have been dubbed “Malachite Man” because of the green and turquoise colorations that have stained the bones. Some have theorized that it could be an Anasazi Indians burial site. But this would mean the Anasazi dug down 100 ft through very hard limestone to bury their dead! Others have postulated that the burial was the result of a mine caving in. But there is no evidence of a mining shaft (which would have to be quite long to arrive at the depth of 100 feet) or any mining tools. The fact that skeletons of women and an infant have been discovered pretty much rules out the mining accident theory. All of this is good evidence that these skeletons buried under Jurassic Dakota sandstone were pre-Flood.

A leading evolutionist has said, “We should be very surprised, for example, to find fossil humans appearing in the record before mammals are supposed to have evolved! If a single, well verified mammal skull were to turn up in 500 million year old rocks, our whole modern theory of evolution would be utterly destroyed. Incidentally, this is a sufficient answer to the canard, put about by creationist and their journalistic fellow travelers, that the whole theory of evolution is an ‘unfalsifiable’ tautology.” (Dawkins, Richard, The Blind Watchmaker, 1986, p.225) But the methodology for dating rock layers largely protects evolution from such an embarrassment. Besides, when the evidence is too strong to deny, evolutionists will slide into “just so” stories and double-standards to explain away anomalous placement. That is exactly what they have done with Malachite Man.