In the Authorized Version of scripture (KJV) we find Isaiah twice mentioning the “fiery flying serpent.” Egypt is called the place of the “lion, the viper and fiery flying serpent,” (30:6). This fits with classical authors describing pterosaur populations in Egypt and Arabia. The Hebrew word here is “saraph.” It is used in Isaiah 6:2 in its plural form “seraphim”. (Goertzen, John, “The Bible and Pterosaurs,” 1998.) This same word is employed in Numbers 21:6 to describe the poisonous reptiles that bit the murmuring Israelites. Could those have been flying snakes? Indeed it is easier to envision an attack of nimble flying serpents (pterosaurs) killing many of the children of Israel rather than them being surprised and killed by common snakes on the ground. The pterosaur on the pole became a type of Christ (John 3:14). It seems more appropriate for this to be a pterosaur than a snake, which from Genesis to Revelation is a symbol of Satan. In addition, the spread pterosaur wings on the top of the pole would form a cross. 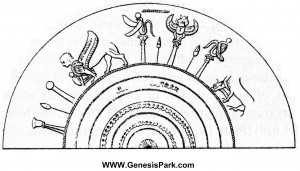 Certain Rhamphorhynchoid pterosaurs had a very long tail. If their legs were incorporated into the wings, they would look very much like a flying serpent. In fact, a plate (right – click to enlarge) found with Sennacherib’s booty at Calah (from the conquest of Palestine) depicts two such winged serpents on poles.II Kings 18:4 tells how the brazen saraph of Moses had become a symbol of worship by Hezekiah’s reign. “It is tempting to identify this emblem with the biblical ‘nehushtan’, the pagan standard or totem pole, set up by Moses to cure the plague of snakes in the wilderness. It will be remembered that this object was preserved in the Solomonic Temple till the time of Hezekiah, who fittingly expelled it from the Temple.” (Barnett, R.D., “Layard’s Nimrud Bronzes and Their Inscriptions,” Eretz-Israel, 1967, p. 3.). The “fiery” flying snake even matches some cryptozoological reports from New Guinea, which attribute to alleged living pterosaurs there a bioluminescent capability like a firefly. For a more detailed analysis, see the published article on The Fiery Flying Serpent.