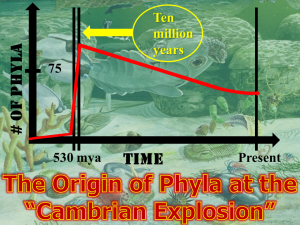 “The Cambrian explosion in animal evolution during which all the diverse body plans appear to have emerged almost in a geological instant is a highly publicized enigma. Although molecular clock analysis has been invoked to propose that the Cambrian explosion is an artifact of the fossil record whereas the actual divergence occurred much earlier, the reliability of these estimates appears to be questionable. In an already familiar pattern, the relationship between the animal phyla remains controversial and elusive.” (Koonin, Eugene, “The Biological Big Bang model for the major transitions in evolution,” Biology Direct, 2007, 2:21.)

“Most of the animal phyla that are represented in the fossil record first appear, “fully formed” and identifiable as to their phylum, in the Cambrian some 550 million years ago…. The fossil record is therefore no help with respect to understanding the origin and early diversification of the various animal phyla… (Barnes, R. S. K., Calow, P. and Olive, P. J., The Invertebrates: A New Synthesis, 2001, pp. 9-10.)

“The most remarkable pattern to emerge from any analysis of early Cambrian metazoan diversification is the extraordinary breadth of morphologic innovation. It is evident at many different scales, from the obvious generation of morphologically distinctive groups to diversity in anatomical details. For instance, one might expect that complexity and sophistication of eyes improved through the Phanerozoic, but the recent discovery of exquisitely preserved eyes from arthropods in the early Cambrian Emu Bay Shale in Australia illustrates that highly advanced, compound eyes with more than 3,000 ommatidial lenses had evolved very early in the history of the clade.” (Erwin and Valentine, The Cambrian Explosion: The Construction of Animal Biodiversity, 2013, p. 216.)

“The paleontological data is consistent with the view that all of the currently recognized phyla had evolved by about 525 Ma. Despite half a billion years of evolutionary exploration generated in Cambrian time, no new phylum level designs have appeared since then.” (“Developmental Evolution of Metazoan Body Plans: The Fossil Evidence,” Valentine, Erwin, and Jablonski, Developmental Biology 173, Article No. 0033, 1996, p. 376.)

“Modern multicellular animals make their first uncontested appearance in the fossil record some 570 million years ago – and with a bang, not a protracted crescendo. This ‘Cambrian explosion’ marks the advent (at least into direct evidence) of virtually all major groups of modern animals – and all within the minuscule span, geologically speaking, of a few million years.” (Gould, Stephen J., Wonderful Life: The Burgess Shale and the Nature of History, 1989, pp. 23-24.)

“The fossil record had caused Darwin more grief than joy. Nothing distressed him more than the Cambrian explosion, the coincident appearance of almost all complex organic designs…” (Gould, Stephen Jay., The Panda’s Thumb, 1980, pp. 238-239.) The Cambrian period (thought to have started 540 million years ago) is a huge evolutionary enigma. Scientists at one time postulated that evolution of phyla took more than 75 million years. Even that period of time was vastly insufficient for this major evolutionary step. Now Darwinists believe that this happened in a few million years. Supposedly nothing but blue-green algae and bacteria lived for billions of years and then in a geologic instant all of the major types of animals sprung into existence! This has been called the Big Bang of Biology. No real progress has been made by evolutionists since Darwin’s day and “The Cambrian evolutionary explosion is still shrouded in mystery.” (Eldredge, N., The Monkey Business, 1982, p. 46.)

“The introduction of a variety of organisms in the early Cambrian, including such complex forms of the arthropods as the trilobites, is surprising…. The introduction of abundant organisms in the record would not be so surprising if they were simple. Why should such complex organic forms be in rocks about six hundred million years old and be absent or unrecognized in the records of the preceding two billion years? …If there has been evolution of life, the absence of the requisite fossils in the rocks older than the Cambrian is puzzling.” (Kay, Marshall, and Edwin H. Colbert, Stratigraphy and Life History, 1965, 736 pp.102-103, as cited in Morris, 1974)

“Before the Cambrian period, almost all life was microscopic, except for some enigmatic soft-bodied organisms. At the start of the Cambrian, about 544 million years ago, animals burst forth in a rash of evolutionary activity never since equaled. Ocean creatures acquired the ability to grow hard shells, and a broad range of new body plans emerged within the geologically short span of 10 million years. Paleontologists have proposed many theories to explain this revolution but have agreed on none.” (Monastersky, R., “When Earth Tipped, Life Went Wild,” Science News, vol. 152, 1997, p. 52.) The problem has become more acute as recent studies in developmental biology make clear that mutations expressed early in development typically have severely deleterious effects, including mutations in crucially important “master regulator” or hox genes. The problem has led to what geneticist John F. MacDonald has called “a great Darwinian paradox.” He notes that genes that vary within a populations affect only minor aspects of form and function, while genes that govern major changes – the very stuff of macroevolution – apparently do not vary, or vary only to the detriment of the organism. (McDonald, “The Molecular Basis of Adaption: A Critical Review of Relevant Ideas and Observations,” Annual Review of Ecology and Systematic, 1983 14:93)

“Eldredge and Gould certainly would agree that some very important gaps really are due to imperfections in the fossil record. Very big gaps, too. For example the Cambrian strata of rocks, vintage about 600 million years, are the oldest ones in which we find most of the major invertebrate groups. And we find many of them already in an advanced state of evolution, the very first time they appear. It is as though they were just planted there, without any evolutionary history. Needless to say, this appearance of sudden planting has delighted creationists.” (Dawkins, Richard, The Blind Watchmaker,” 1986, p.229).

While many of scientists have commented about the “missing links” in the fossil record, H.S. Ladd of UCLA observes, “Most paleontologists today give little thought to fossiliferous rocks older than the Cambrian, thus ignoring the most important missing link of all. Indeed the missing Pre-Cambrian record cannot properly be described as a link for it is in reality, about nine-tenths of the chain of life: the first nine-tenths.” (Geological Society of America Memoir, vol. II, 1967, p.7.)

Dr. Paul Chien is chairman of the biology department at the University of San Francisco. He has extensively explored the mysteries of the marvelous Cambrian fossils in Chengjiang, China. Moreover, Chien possesses the largest collection of Chinese Cambrian fossils in North America. In an interview with Real Issue he remarked, “A simple way of putting it is that currently we have about 38 phyla of different groups of animals, but the total number of phyla discovered during that period of time (including those in China, Canada, and elsewhere) adds up to over 50 phyla. That means [there are] more phyla in the very, very beginning, where we found the first fossils [of animal life], than exist now. Stephen J. Gould, [a Harvard University evolutionary biologist], has referred to this as the reverse cone of diversity. The theory of evolution implies that things get more and more complex and get more and more diverse from one single origin. But the whole thing turns out to be reversed. We have more diverse groups in the very beginning, and in fact more and more of them die off over time, and we have less and less now.”

“The pattern of disparity observed during the Cambrian pose two unresolved questions. First, what evolutionary processes produced the gaps between the morphologies of major clades? Second, why have the morphological boundaries of these body plans remained relatively stable over the past half a billion years?” (Erwin and Valentine, The Cambrian Explosion: The Construction of Animal Biodiversity, 2013, p. 340.)

Some modern Darwinists have suggested that the absence of primitive lifeforms below the Cambrian is not a problem for evolution. However, this difficulty was fully appreciated by Darwin and it has only become more acute since his days. “Nevertheless, the difficulty of assigning any good reason for the absence of vast piles of strata rich in fossils beneath the Cambrian system is very great. …The case at present must remain inexplicable; and may be truly urged as a valid argument against the views here entertained.” (Darwin, C., The Origin of Species, 1872, pp. 316-317.) Gould writes, “The Cambrian Explosion occurred in a geological moment, and we have reason to think that all major anatomical designs may have made their evolutionary appearance at that time. …not only the phylum Chordata itself, but also all its major divisions, arose within the Cambrian Explosion. So much for chordate uniqueness… Contrary to Darwin’s expectation that new data would reveal gradualistic continuity with slow and steady expansion, all major discoveries of the past century have only heightened the massiveness and geological abruptness of this formative event…” (Gould, Stephen J., Nature, vol. 377, October 1995, p.682.) “The Cambrian explosion was the most remarkable and puzzling event in the history of life.” (Gould, Stephen J., “The Evolution of Life,” in Schopf, Evolution: Facts and Fallacies, 1999, p. 9.)