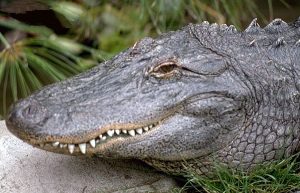 Alligators closely resemble the crocodiles but have a broader snout and lack the side notch that exposes the long fourth tooth of the lower jaw when the mouth is closed. For alligators, the upper jaw is wider than the lower one, so when they close their mouths, the upper teeth are typically seen. Alligators are fresh water reptiles while some crocodiles are at home in saltwater. Caimans, cousins to the alligators, are smaller crocodilians that live in South America. The smallest is the Cuvier’s Dwarf Caiman which grows to about 3 ft long,

The female American Alligator prepares a nest on the bank of a pond, lays dozens of eggs in it, and covers them with mud. The eggs are then incubated by the heat of the sun and will hatch in a couple of months. The baby alligators will call when hatched, and the mother alligator then carries them in her mouth to the pond. All crocodilians studied so far exhibit temperature-dependent sex determination. Nest temperatures below 86°F produce mostly females; at 87°F produces a mixture; and warmer temperatures produces predominantly males. The male alligator is renowned for its intimidating bellow (click to listen). The largest recorded length for an American Alligator is 19′ 2″, killed in the early 1900’s in the state of Louisiana. Since the belly skin of alligators lacks the bony plates typical of crocodile skin, it can be worked to form superior leather for shoes, belts, and handbags which has made the alligator a prime target for hide hunters. Unfortunately it has also made large specimens rare. Only recently has the American alligator been removed from the endangered list. 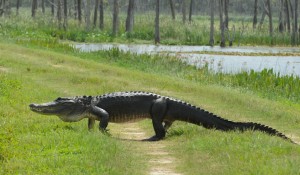 Among the crocodilians, only alligators live in areas where the seasonal temperatures drop below freezing. Some hibernate while others maintain an ice-free hole around their snout in order to breathe. Though they breathe through lungs like mammals, alligators have been known to to submerge completely underwater (or expose only their eyes) for up to 3 hours! They accomplish this in part because of a specialized heart. They can slow their heart rate to only 2 or 3 beats per minute.  There are also peculiar gears in the crocodilian heart that are designed to close like cogs and shunt the blood away from the oxygen depleted lungs and back out to the body.