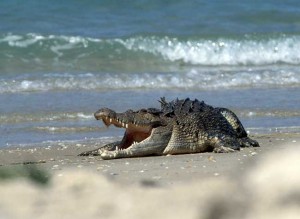 The largest living reptile in the world is the saltwater crocodile of southeastern Asia. It lives from northern Australia up as far as the eastern coast of India. These crocodiles will grow up to 7 m (about 23 ft) and will weigh up to a ton. Despite that massive size, they are capable of very rapid movement. Their only predator is man. Saltwater crocs (along with various other reptiles) have the ability to sleep with one eye open. Experiments have been conducted on these crocodiles to determine the reason for this. It seems that these reptiles engage in unihemispheric sleep (where an organism sleeps with only half of its brain at a time). The experiments showed that this allows them to remain more vigilant against threats.  The saltwater crocodiles have salt glands that enable them to better survive in saltwater (a trait not known in alligators). Large saltwater crocodiles are a popular zoo attraction in various countries. 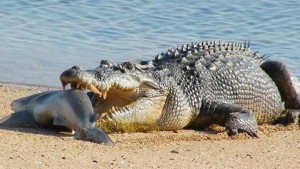 Saltwater crocodiles feed on fish as well as birds and mammals that venture too close. They have even been known to eat toads (whose toxins typically kill other crodilians). Because of their power, intimidating size and speed, these reptilian monsters have been known to attack and kill humans. Agile swimmers, they have been clocked at 18 mph in the water, three times faster than humans can swim. On average, one person a year is killed in Australia because of their attacks. The wide jaws have the strongest bite of any animal known, capable of instantly crushing even the skull of a large goat. But despite that ferocious closing force, the crocodile’s opening muscles are rather weak. This allows crocodile handlers to keep their mouths shut with just a few wraps of duct tape.