The Thorny Devil and Horned Lizards 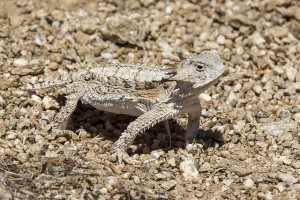 Various modern lizards have armor with frills, spikes and horns reminiscent of the ancient dinosaurians Triceratops, Ankylosaur and Stegosaurus. Girdle-tailed lizards even have overlapping scaled armor. The horned lizards can consume vast amounts of ants every day. Found largely in the western United States and Mexico the well-camouflaged Regal Horned Lizard will seldom attempt to hide but may defend itself if provoked by puffing up its body and squirting blood, sometimes as far as a few feet, from a reserve behind its eyes. The Pygmy Short-Horned Lizard can handle very cold weather (even freezing) conditions by burrowing into the ground and becoming dormant. Field observations have confirmed that certain predators have died from puncture wounds after swallowing horned lizards! 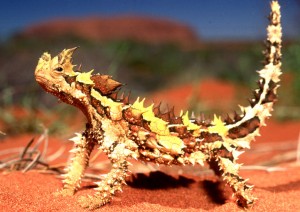 Thorny Devil in the Australian Outback

Next we consider the fascinating lizard Moloch horridus or “Thorny Devil.” The name Moloch comes from a pagan demon god mentioned in the Bible. The dragon-like horns attached to scales on the head make this lizard look particularly intimidating. Because it is so well armored from head to tail it is seldom challenged by predators. This spiked lizard lives in dry or desert areas of central Australia. In the harsh desert environment, the Thorny Devil collects water when dew forms on its skin and thousands of tiny straw-like grooves allow the dew to spread quickly over the lizard’s body by capillary action. Once the water reaches its lips, the lizard sips it easily into the corner of its mouth. This amazing capability acts almost like a straw, such that this lizard can stand in a puddle and suck the water up! They have even been known to scoop wet sand onto their banks so that the moisture can be extracted (“Thorny Devil May Drink from Sand,” Nature, November, 2016, p. 142.) Devils survive largely on ants, consuming as many as 5000 per day.

While few predators bother such a prickly specimen, the Australian Goanna (a large species of monitor) will dig up their nests and eat the babies. The Thorny Dragon also features a spiny “false head” that is made of soft tissue and forms a lump on the back of its neck. When a predator approaches, the lizard presents this to potential predators by lowering its real head. The false head, together with the tucked down real head, present a larger and more intimidating ball of spikes! The “false head” is just one small feature of the Thorny Devil’s uniquely created skull and mandible. Together these features pose significant challenges to evolutionists trying to postulate an ancestral lineage.