There is tremendous variety in the thousands of dinosaur species that have been discovered around the world. Different dinosaurs ranged in weight from 2 kg (4 lb), in the case of Compsognathus, and up to 73 metric tons (160,000 lb), in the case of Brachiosaurus. A similar giant, Ultrasuarus, was named from a few very large bones that were discovered. Some scientists estimate that this creature was 100 feet long and weighed up to 150 tons. Many dinosaurs were large, weighing in at around a ton. Most were herbivores, but some large saurischians were carnivorous. The majority were four-footed but some ornithischians and all carnivores strode on their hind legs. The average size for a dinosaur is approximately that of a bison, about 1,400 pounds. (Clarey, T., and Tomkins, J.P., “Determining Average Dinosaur Size using the Most Recent Comprehensive Body Mass Data Set, Answers Research Journal, 2015, pp. 85-91.)

Much like the tremendous variety in the breeds of dogs, there were probably only a relatively small number of dinosaur kinds that flourished into many genetic variations. 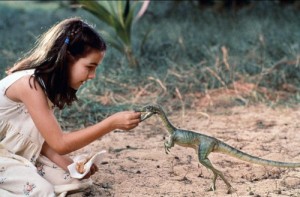 The 2002 Dinosaur Display at the British Museum of Natural History stated: “Dinosaurs may have had no maximum size and carried on growing slowly throughout their lives. Some fossil bones have growth rings, like trees, but not clearly enough to show how long the dinosaurs lived.” If dinosaurs lived to a ripe old age in the ideal conditions of the early earth, it certainly explains how some grew so big. But the fact that other dinosaur species were so small makes it difficult to explain how a meteor strike (the most popular of the many dinosaur extinction theories) would have killed every single dinosaur but left so many lizard varieties to survive.