The Nile Mosaic of Palestrina 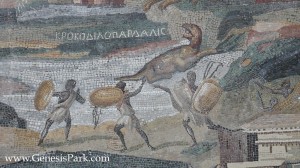 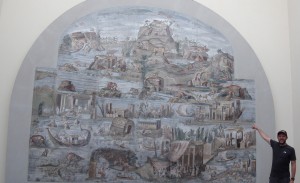 The Palestrina Mosaic is one of the most beautiful “Ancient Dinosaur Depictions” we have come across. Above right is the full piece with Dino Dave Woetzel standing alongside to give it some scale (click to enlarge to full size). But the lighting in the Palazzo Barberini does not due it full justice and the mosaic was probably even more vivid originally. Artist Richard Dobbs did some magic on the image above to enhance the colors, representing how it may have originally appeared. (Note the digitally enhanced image below to the left.) Just to the right is Dobbs’ interpretation of the Palestrina reptile, based upon an Eotitanosuchus. Not only does the general morphology of Eotitanosuchus match the Palestrina creature, but its structural similarity to crocodilians matches the descriptive name “Crocodile-Leopard” written on the mosaic. 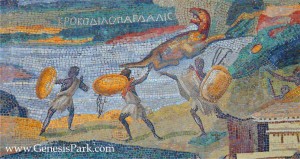 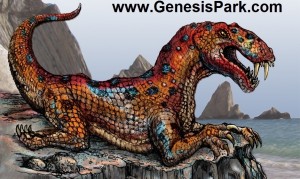