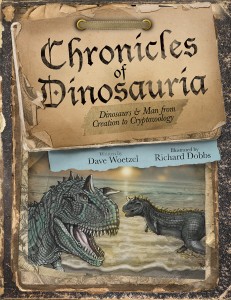 Chronicles of Dinosauria: Dinosaurs & Man from Creation to Cryptozoology is our featured book, presenting the key evidence that men and dinosaurs coexisted. Biblical, historical, artistic, fossil, and cryptozoological evidence are all explored. This beautiful hardback assembles in one place the work of Genesis Park staff, from years of researching dinosaurian cryptids and accumulating dragon accounts and ancient dinosaurian depictions from various cultures around the world. Presented in a scrapbook style, Chronicles of Dinosauria tells the story of the dinosaurs from a biblical perspective, starting with the plain facts of Genesis. God’s purpose in creating the great reptiles is explored. Photos from expeditions hunting for living dinosaurs are presented alongside informative graphics. The beautiful original artwork will delight old and young alike. Take a peak inside!

Available from Genesis Park for $16.99 plus shipping from Pathway Books 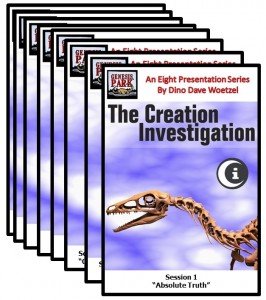 Over 12 hours of  information on the origins debate. These videos consists of lectures before a live audience with slide visuals for illustration. The full series takes the viewer from the foundational question about truth and how we know there is a God, through the history of the creation vs evolution controversy, to the latest scientific discoveries pointing to design and the exciting evidence that men and dinosaurs co-existed. The last session is meant to strengthen believer’s faith in the inspiration of the Bible. (For further information, see the Description of the Creation Investigation Sessions or watch the Overview Promo Video.)

Purchase the entire eight-video DVD seminar set for $99.00 plus shipping

Behemoth or Bust: An Expedition in Search of the Living Dinosaur of Africa
Could dinosaurs still be alive today? This DVD presents an overview of the Biblical Behemoth and then takes the viewer through a journey of exploration with Dave Woetzel and Bill Gibbons as they penetrate remote rain forests on the border of Cameroon and Congo in search of the mysterious Mokele-mbembe. See for yourself eye-witness interviews with pygmy peoples who had never been contacted by an outsider. Join the expedition as they hack through jungle vegetation, slog along swampy trails, float rivers, and meet with intrepid missionaries. Behemoth or Bust also presents the viewer with the relevance of this work to the origins debate.
.
Available for $19.00 plus shipping 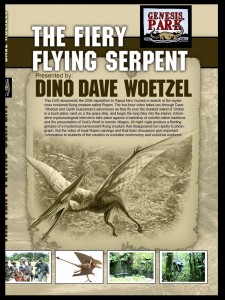 The Fiery Flying Serpent
This DVD presents the Biblical and historical background regarding the “Fiery Flying Serpent” and then documents the 2004 expedition to Papua New Guinea in search of the mysterious nocturnal flying creature called Ropen. The video takes you through Dave Woetzel and Garth Guessman’s adventures as they fly over the isolated island of Umboi in a bush plane, land on a the grass strip, and begin hiking. Informative cryptozoological interviews take place against a backdrop of colorful native traditions and the presentation of God’s Word in remote villages. All night vigils produce a fleeting glimpse of a mysterious luminescent flying creature. The final team discussion gives important information to students of the creation vs evolution controversy and would be explorers.
.
Available for $19 plus shipping 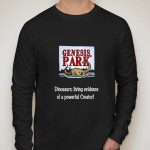 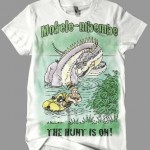 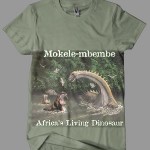 COMING SOON – Ultra Cotton T-Shirts, 6 colors, available in a wide variety of youth and adult styles. The front has the Genesis Park logo and tagline. The back has the website address. Enjoy comfortable attire and help spread the word about our great Creator at the same time! 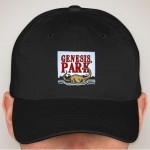 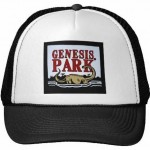 Make a fashion statement with a stylish Genesis Park silk necktie. Or sport a bold Genesis Park logo ball cap, in black or white. You’ll be pointing people to our popular creationist dinosaur website at the same time as initiating some interesting conversations about origins, cryptozoology, and dinosaurs!