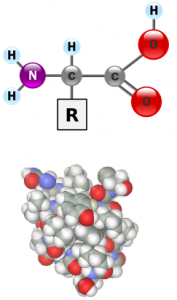 Last month we began a series on the marvelous protein machines in the cell. I mentioned that proteins are a bit like the building blocks that make up the infrastructure of a large complex. But let’s be a bit more specific than that. Proteins are built up of chains of amino acid molecules (like the one pictured upper right) that are folded up in particular ways, providing a robust 3D shape. It is this shape that makes the protein (lower right) useful as a particular component of a biomolecular machine. Think about assembling a machine that requires a certain number of bracketts, screws, washers, gears, etc. The number of pieces, the precise insertion location and the order of the construction are all very important if the machine is going to actually work in the end.

But we now face a vicious “chicken and egg” scenario. If the first living cell needed protein machines to be able to survive (take in nutrients, eliminate waste and reproduce) what made those first machines? They are only built by nano-machinery in a pre-existing cell! Worse than that, many of the 22 amino acids used in biological organisms are synthesized only in certain plants and bacteria. The Law of Biogenesis states that only life begets life. With what we now know about the complexity of proteins, it is not scientifically defensible to claim that life came from rocks!