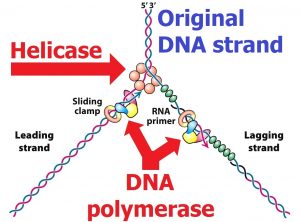 In recent months we have been considering the sophisticated microscopic machinery of the cell. This time I would like to simplistically discuss a couple of the amazing genetic replication proteins. Our DNA is wound up like a twisted rope. Unwinding it is the job of a protein machine called helicase. Like the motor protein kinesin, it runs on ATP fuel to do its work of separating the two DNA single strands for duplication. This is an essential first step in cell division and occurs billions of times every day in your body. Helicase unwinds the double-stranded DNA, spinning as fast as a jet engine. Following in behind is another protein machine called DNA polymerase, which is part of the complex that adds complementary bases to form the newly completed DNA strands.

The process is kind of like copying a computer file onto a USB stick or uploading it to the cloud. Instead of reading and correctly replicating bits of computer data, the duplicated information in the DNA is composed of nucleotides. The DNA polymerase produces copies at the rate of approximately 750 nucleotides per second! But among its subunits is also one with the capability to proof its own work. If the polymerase assembly detects a wrong nucleotide, it will remove and replace it immediately, before continuing with DNA synthesis. Here is a great video animation of some of these incredible microscopic protein machines at work. How does one make an incredibly precise nanomachine like DNA polymerase? The instructions for building it are coded in DNA. So again, evolution faces a serious “chicken and egg” problem. What happened along by chance first, the DNA information library? or the reading, replication and proofing machine?