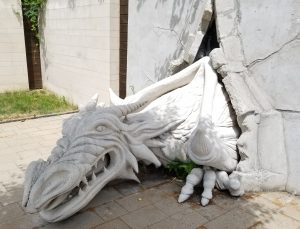 To the right is a sculpting of the Bator Dragon. Reliable historical accounts tell of a dragon that was killed in the swamps of what is now Bator, Hungary about the year 1035. This fierce reptile had become the scourge of the countryside and was finally destroyed by some courageous townspeople. Thereafter the town became known as Bator, which means “Brave” in Hungarian. The Báthory family of this town became a royal family. Statues near the local Reformed and Catholic churches in the center of town still commemorate this momentous accomplishment. Three of the dragon’s teeth were kept as mementos of the event. These relics (since lost) were memorialized as the in the Báthory seal that is still used today.  In the photo, I am standing by a modern reproduction of the Bator Dragon, based on the ancient legend. Click to learn more about Historical Dragon Reports.