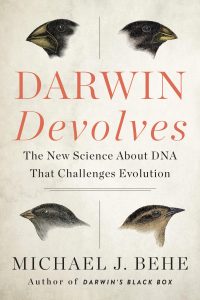 A number of advances in our understanding of the underlying genetic mechanisms of variation are challenging traditional darwinian understandings. Evolution is supposed to proceed by random variations that natural selection preserves because they confer a slight advantage. But increasingly, we are finding that variation is not random. The genetic mutations that modify the beak of a bird may be tripped by feedback from the environment that food is scarce. Hotspots of DNA diversity can kick into gear to allow the population to survive, much as a modern computer system might go into a “safe mode” (eliminating non-essentials in the interest of stability) because it senses something is wrong. Whole suites of genetic traits can be rapidly modified together…far too quickly to be random changes and slow selection. All of this has the hallmarks of a designed system. In a book released earlier this year, biochemist Michael Behe shows that Darwin’s mechanism of natural selection can work to provide short-term benefit only by reducing long-term genetic information. Thus, unguided evolution is a one-way ticket to extinction! How could such a blind, fundamentally wasteful process fashion a human eyeball, even over millions of years? It just isn’t believable.