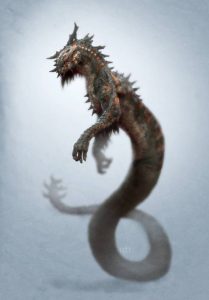 January 1st marks the beginning of the new year for most of the world. But for the Chinese, this greatest holiday of the year varies because their ancient calendar was based on the lunar cycle. The Chinese New Year is a single day, but the celebration has become synonymous with the “Spring Festival,” which lasts from a week up to 15 days. Celebrations include fireworks, drums, red decorations, lanterns and parades complete with dragon and lion dances. But most westerners are unaware of the traditional roots of the Chinese New Year activities. The origin lies in a story about a ferocious monster called Nian who was said to slumber deep in the sea. The monster was somewhat like a dragon crossed with a lion. Once a year, at the very end of the lunar calendar, when the cold winter months would turn again towards spring, the monster would crawl onto the shore to satisfy its tremendous appetite. Nian devoured people, cattle and even wild animals, hunting down anything that came into its path. Many brave Chinese warriors lost their lives fighting Nian. But a humble beggar discovered the secret to driving off Nian. The monster was afraid of bright lights, loud noises and the color red. With the appropriate nighttime decorations and fireworks, the dragon could be frightened away. The traditional Chinese phrase “Celebrate the New Year” is “Guò Nián!” which literally means “Survive the Nian.” It has been said that every legend contains a sliver of truth. Was there once in an ancient dynasty a real dragon who was driven away with lights and firecrackers? The Italian explorer Marco Polo brought back reports in the 1200s of two-legged, nocturnal dragons living in the province of Karajan in China. Perhaps encounters with these reptiles was the origin of the Nian Monster story.

One thought on “The Chinese Nian Monster”