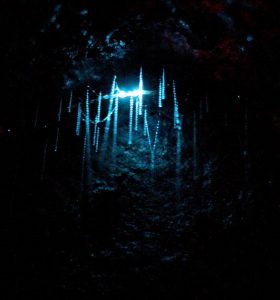 Last month we considered the wonder of simple fireflies and their amazing light-generating organs called photophores. This month I want to consider glow worms. There are different kinds of light-producing worms. Some are merely juvenile fireflies. In their wingless, larvae state, these bioluminescent worms have the same photophores as adult beetles.  These glow worms are omnivores, preying on snails, insects and other small invertebrates. Certain fungus gnat larvae can produce a blue-green light (picture above right) while in their larvae state as well. These glow worms produce light from a secretion organ in their tail called a Malpighian tubule. The worm’s mouth excretes a sticky web which is used to catch flying insects that are attracted by the hanging pearls of light. The worms typically live for about three years in their cave habitat. Then the worms burst out of their skin to become adult flies. But the flies do not have mouths and so they do not eat anything at all. Within a few days, eggs are laid that will hatch into young glow worms. Then the flies die. The creativity of our God is truly amazing!