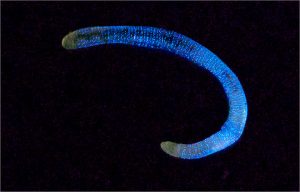 This month’s blog is a collaboration with George Damoff, PhD. George is a megadrilologist (earthworm biologist). Last month’s article on “glow worms” caught his attention and he was eager to “dig into” this topic with me. While glow worms are larvae of insects, true worms (annelids) have also been known to emit light. There are at least 16 luminous species of earthworms. Most exude bioluminescent fluid through pores (somewhat like the spout of a whale). Each species emits a distinct wavelength of light, mostly in various hues of blue and green. Because of this diversity among earthworms, Darwinian evolutionists speculate that bioluminescence evolved independently in the various lineages. But it is difficult enough to believe this intricate ability evolved once, much less numerous times! However, creationist have an issue to resolve with this too. Contrary to many cartoons, subterranean earthworms do not have eyes, which means they have no need for light to see their way through the soil. So why do they glow? It has been hypothesized that the phenomenon could be a defense mechanism. Another idea is that the worms once had a means of sensing light but have lost it (devolution). This has happened in numerous species of cave-dwelling organisms. Or could it be the sheer delight of the Creator who enjoys displaying beauty and creativity? “And God saw that it was good!” (Genesis 1:25).