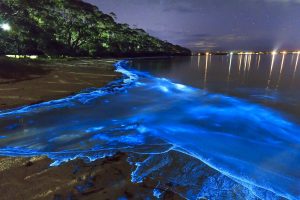 We’ve considered some of the macroscopic glowing organisms (flies, worms, mushrooms), but what about the microscopic world of bacteria? Most of the luminescent bacteria dwell in the marine habitat. Stories of “glowing oceans” go back for thousands of years. In 300 BC, Aristotle wrote that lightning was similar to when “you strike the sea with a rod by night and the water is seen to shine.” Other ancient authors discuss the sea being aflame with fire. The tiny glowing bacteria utilize the same enzyme we’ve discussed before: luciferase. It seems that the glowing ability is used by the bacteria as a means of dispersal. When the water is disturbed (cuing the bacteria of the presence of a large animal) the bacteria glow. By attracting predators the bacteria make their way into the digestive tracts of fish and other marine organisms. Later they are excreted in fecal pellets in a different location. Other microscopic organisms, called dinoflagellates, produce a tiny flash that make the seawater sparkle at night. It is thought that this bright flash is a defensive mechanism that helps them startle predators. Glowing bays (like the one picture above in Puerto Rico) are popular tourist attractions. As the Psalmist observed, “This great and wide sea, in which are innumerable teeming things, living things both small and great” (Psalm 104:25).