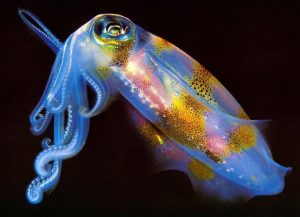 Last month, we discussed bioluminscent bacteria, including dinoflagellates, tiny marine plankton that can sometimes cause the surface of the ocean to sparkle at night. Certain other bioluminescent sea creatures utilize the glow of the tiny microorganisms to make themselves glow. Consider the Bobtail Squid. It employs glowing bacteria in a symbiotic relationship. The bacteria inhabit a special light-producing organ in the squid’s mantle. The bacteria are fed a sugars directly from the squid. Then in return the bioluminescent bacteria help hide the squid’s silhouette by producing a slight glow. When the squid is viewed from below, its shadow is broken up by the bioluminescence. The amount of glow can be increased or decreased to match the amount of light hitting the top of the squid (based on how deep in the water it is). This method of camouflage is called counter-illumination. The Firefly Squid has thousands of these photophores. It can flash them separately or in unison. These squids put on quite an underwater light show when the gather by the millions to spawn in places like Toyama Bay in Japan.