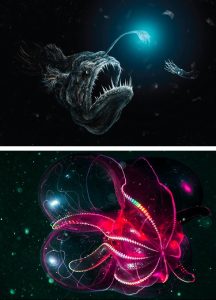 The next installment of our ongoing series on bioluminescent creatures focuses on larger marine organisms, glowing fish. Perhaps you recall the angler fish that was a villain in the movie Finding Nemo. Pictured on top, this ugly occupant of the dark, silent deep has a spiky fin ray that sticks out of its forehead, acting like a pole. At the tip of it is a small glowing ball called the esca. The glow comes from symbiotic bacteria that live in the esca. Even this faint light stands out in the blackness several miles below the surface and it attracts a variety of smaller fish that become prey. In some species only the female has the ability to glow and this helps to attract a mate. The male bites the underbelly and attaches to the female for life. The lantern fish is a smaller, slender fish. It flashes by using the same chemical reaction as a firefly. With over 200 different species, it is one of the most common fish in the ocean. It is thought that the glow primarily helps in attracting mates. One of the most beautiful underwater glowing creatures are the comb jellies (lower pane). These delicate jellyfish can grow as big as a basketball. It seems that their marvelous light is primarily a defensive mechanism. By producing a bright flash, the comb jelly is able to startle a predator. What power there is in light! The Bible tells us, “And this is the condemnation, that light is come into the world, and men loved darkness rather than light, because their deeds were evil” (John 3:19).