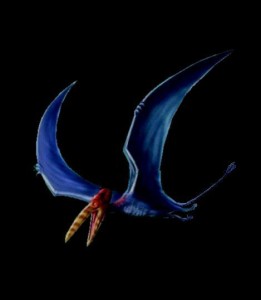 This is the last of our series on animals that have the ability to glow at night. I want to end by discussing bioluminescent pterosaurs. The Bible references the “fiery flying serpent” (Isaiah 14:29, 30:6). I’ve written a whole journal article on glowing reptiles that fly. But here I want to specifically discuss their light. I can appreciate that it is difficult for folks to buy into the idea of extant pterosaurs flying around at night in some remote areas of the world, and even more challenging to think of them glowing! But I’ve actually seen this phenomenon in the country of Papua New Guinea. A team of us were hiking around a volcanic island, looking for the large, leathery-winged creature that the nationals call “Ropen.” One night, I was up late, looking at the sky through a night vision monocular. Suddenly, I saw something light up brightly. It flew between me and the next mountain (which rules out a shooting star or jetliner). The glow lasted for just a few seconds before fading back out. It was too far away for me to make out details of this creature. But I’m quite certain it was an animal since it made no noise at all (not that anyone on those remote islands owns a drone).

That was my first encounter. I have since seen these glowing creatures fly acrobatically, executing sharp turns and even doing a loop-de-loop! For years I wondered why they had this ability to glow. Was it to attract mates or give a territorial warning sign? These ideas don’t make much sense because they are moving so quickly and don’t stay in one locale for long. Then we observed that they can control the intensity of their light. So, my best theory as to why they glow is for camouflage. It seems that they have the ability (like the sharks we discussed) to glow rather dimly most of the time. This disguises their shadow as they quietly glide over the landscape. By matching the ambient light of the sky, these predators can more easily slip up on an unsuspecting rodent. Stay tuned on this as we continue to do fieldwork with the hopes of learning more about these amazing creatures.