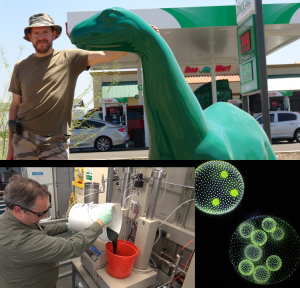 This month we introduce a new series, a review of some of the creation-related things we can learn from fossil fuels. Our modern lifestyle is largely built on the fossil fuel industry. Extensive research into coal, natural gas, propane and oil has given us a greater understanding of the origin of these materials and a unique glimpse into the Earth’s past. Why are they called “fossil” fuels? Because they are transformed remains of ancient living organisms. It was once thought that oil came from dead animals like dinosaurs. Perhaps you have seen a Sinclair gas station, which uses a green dinosaur as their company logo. But now we know that oil is not from dead dinosaurs. Oil mostly came from the transformation of tiny, plant-like sea life (lower right picture). That’s why much of the oil is found below the bottom of the oceans. Oil started out as living things called bacteria, plankton and algae. Many people are under the mistaken impression that it takes a long time to make fossil fuels…just because of the name or because of the fact these fuels are buried deep down in the rock layers. But oil doesn’t take millions of years to form. It takes the right conditions…fast burial, pressure and heat. Engineers working for the US Department of Energy at the Pacific Northwest National Laboratory reported that they were able to transform harvested marine algae into crude oil in less than one hour! These findings support the creation science idea that oil formed during the Genesis Flood.

One thought on “Fossil Fuels – Part 1”