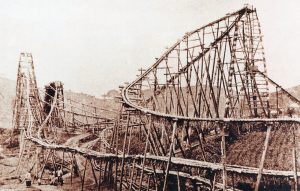 Have you ever seen a video of an oil well blowout? This is when the oil underground is under tremendous pressure and our drilling through the overlying rock provides an escape for it to come squirting out, sometimes high into the air. One oil well in Texas gushed more than 4,200,000 gallons of oil per day and made an oil fountain 200 feet high! Evolutionists, who believe the fossil fuels were made millions of years ago, have a difficult time explaining how such immense pressure could be maintained over vast eons. Small fractures in the rock over time should have released that pressure. Natural gas is another fossil fuel. Because it is like air, it should have leaked out of the ground even easier than oil. In fact, natural gas is lighter than the air that we breathe, and so it wants to fly up into the sky! But when natural gas is found today, it’s still under great pressure down in the rocks. Thousand of years ago, the Chinese used the pressure of natural gas that they had discovered under the ground in China. They made pipes out of bamboo (see picture) and channeled the gas into their homes where it provided heat and light. How could such pressure be maintained for up to 150 million years? Creationists believe that the fossil fuels were made during the Genesis Flood, just a few thousand years ago. The flood waters pressed down on the biological material, not only allowing the quick transformation into fossil fuels, but also pressure packing it under hardening sediments. “Fifteen cubits upward did the waters prevail [about 30 ft]; and the mountains were covered” (Genesis 7:20).