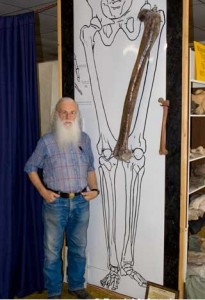 In the late 1950’s, during road construction in the Euphrates Valley of southeast Turkey, fossilized human remains were uncovered. At the site, an engineer measured a femur (the long leg bone) and reported that it measured to be 120 cm (47.24 in.). Joe Taylor, Director of Mt. Blanco Fossil Museum, was commissioned to sculpt the human femur. This giant stood some 14-16 ft tall (right). Likely this was a skeleton of a pre-flood person. That was a time of giant organisms, a time when men lived for several centuries. Genesis 6:4 states: “There were giants in the earth in those days.” These were men who stood out from their peers even during that age. Moreover, it tells us that there were giants again after that time. We note in post-Flood times that Deuteronomy 2 discusses multiple races of giants: Emims, Horims and Zamzummims. Deuteronomy 3:11 tells about the bed of Og, king of Bashan. It was 9 cubits by 4 cubits (approximately 14 ft long by 6 ft wide). This giant, the last of the Rephaim race, was probably about 12 ft tall In Numbers 13:28-33 the Israelite spies investigated the land of Canaan in preparation for an invasion. They reported a race of giants that made them feel like mere grasshoppers. Their descendants entered the land and conquered these giants (the Anakim). The most popular giant was Goliath, who probably stood about 10 ft tall (I Samuel 17:4). He had to have really been that big to be called a giant. It was said of King Saul that “from his shoulders and upward he was higher than any of the people” (I Samuel 9:2) and he was not considered a giant.

In his 2012 book Giants Against Evolution Joe Taylor cites many historical and anecdotal accounts of giant human skeletons or depictions being discovered around the world. These include fascinating accounts by explorers involving the Patagonian giants who were 10-12 feet tall. The Spanish called the big-footed giants “Patagones,” which became the basis for the region’s name. Giant skeletons have actually been unearthed in the United States. The Mississippian (Mound Builder) civilization was an early North America culture that predated the arrival of European settlers, flourishing from 800 AD to 1600 AD. This culture covered an area from the Great Lakes to the Gulf of Mexico, building thousands of large earthen mounds. In Cahokia, Monk’s Mound is as big as a football field and stands 100 ft up in the air (19 million cubic ft of earth)! The Cahokia Museum displays a series of axe heads that were discovered at the site. The larger ones weigh over 30 pounds and would require a giant to wield them!

In the 1800s, many mounds were excavated. Some contained skeletons of 8-10 foot tall giants. The giant skeletons were shipped to the Smithsonian and then disappeared. Evolutionary theory was becoming popular and ancient giants didn’t fit the new paradigm. It seemed a bit too “Biblical.” Most Americans today are not even familiar with the Mound Builder culture or the giant skeletons. But this was common knowledge in the 1800s. In 1848 Abraham Lincoln wrote, “Niagara-Falls! By what mysterious power is it that millions and millions, are drawn from all parts of the world, to gaze upon Niagara Falls? …The eyes of that species of extinct giants, whose bones fill the mounds of America, have gazed on Niagara, as ours do now.” An example of these archaeological giant discoveries is this report: While at work on a huge mound near Chillicothe, OH they found the massive skeleton of a man. His mouth was stuffed with pearls and his whole body was encased in copper armor. (Powell, J.W., “12th Annual Report of the Bureau of Ethnology to the Secretary to the Smithsonian 1890-91,” 1894.) Archaeological digs at Moundville, AL occurred  1870s. The Alabama Historical Society reported in 1876 that Hezekiah Powell discovered “the skeleton of a man that measured 9 feet from head to heel as he lay in the ground…” (Steponaitis, Vincas P., “The Smithsonian Institution’s Investigations at Moundville in 1869 and 1882,” Midcontinental Journal of Archaeology 8:1, 1983, p. 132.) 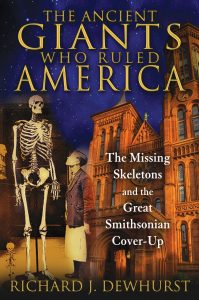 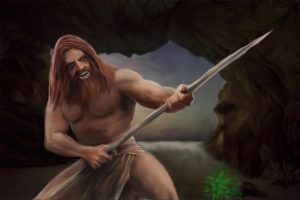 Newspaper reports of giants from the 1800s fill whole books (left).  Some are clearly sensational and exaggerated. But others are well researched and credible. Moreover, many native American tribes have legends of bearded giants that were known to their ancestors. For example, the Paiutes recount stories of a race of cannibalistic, red-haired giants, the “Saiduka.” The Paiute tribes became vexed with these giants capturing their villagers and so they put together a coalition and started a war. The legend says that the Indians, after a long struggle, trapped the remaining Saiduka in Lovelock Cave. When the giants refused to come out, the Paiutes piled brush in the cave mouth and set it aflame, annihilating them. A large assortment of Native American skeletons and artifacts have been recovered from this cave. Reports on these giant skeletons stood 8-10 ft tall. 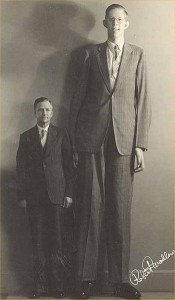 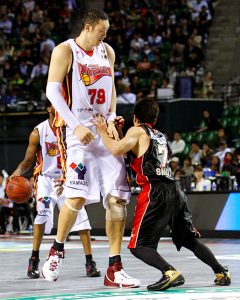 The tallest person in our recorded history was Robert Wadlow of Alton, IL (left). Wadlow was born on February 22, 1918 and grew to be 2.72 m (just under 9 feet tall). He died in 1940 at just 22 years of age and was buried in a 10-foot long, half-ton coffin that required twelve pall bearers! Giantism is actually a disease caused by pituitary gland malfunction and hypertrophy. Such giants have limited mobility and generally die young. This is very different from the races of giants known in history who were men of war (II Samuel 21:20). According to the Guinness record keepers, the tallest man alive today is Sultan Kösen of Turkey. He was born in 1982 and stood at 8 ft 3 in 2011. The tallest NBA player was Sun Mingming (right), the Chinese player drafted by the Harlem Globetrotters in 2007. He stood 7’9”.