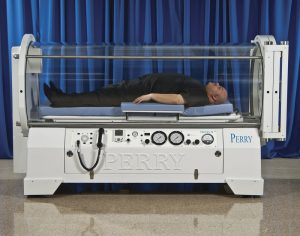 For some time medical hyperbaric chambers have been used to hasten healing of skin injuries and various other ailments. While many hospitals contain a chamber like the one shown to the right, professional sports teams and celebrities have increasingly been experimenting with sleeping in enhanced oxygen and high pressure. Around the world, evidence is mounting that these chambers can reduce infection (as the skin itself absorbs oxygen), heal diseases, decrease stress, and enhance stamina. Perhaps the increased atmospheric pressure and larger percentage of oxygen on the early earth would have similarly contributed to a much healthier environment for biological systems. Scientists conducting deep sea research have built stations far under the ocean. Aquanauts living for a month or more in this setting with increased pressure and extra oxygen have reported some unexpected side effects, like increased hair growth. 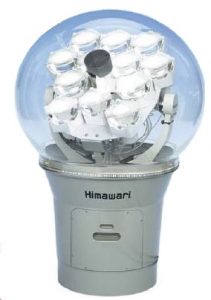 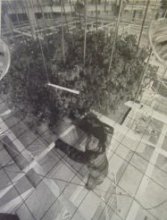 plants under special light that filtered out IR and UV radiation. His unique process of sunlight collection via a fresnel ray assembly and fiberoptic transmission, called “Himawari Sunlighting,” is now marketed worldwide. At first Mori feared the filtered light would be detrimental. But after extensive experiments he claimed it could promote healing and “because the ultraviolet is blocked, this sunlight does not fade fabrics or damage skin.” (Gilmore, Elaine, “Sunflower over Tokyo,” Popular Science, May 1988, p. 75.) One long-lived tomato plant (shown right) was grown in a special nutrient-rich hydroponic solution to be exhibited at the Japan Expo ‘85. Under piped sunlight and controlled atmosphere, this veritable “tomato tree” grew over 30 ft high and yielded more than 13,000 ripe tomatoes during the six months of the Expo! (Hiroshi, Koichibara, “Tomatomation,” UNESCO Courier, March 1987.) Much of the credit for this agronomic wonder was given to the Himawari technology. “Prime attractions will include a TV screen as tall as an eight-story building and a 30-foot tomato tree grown by researchers using light-absorbent optical fibers.” (LA Times, March 3, 1985.) Could Mori’s environment of filtered sunlight, enhanced carbon dioxide, and nutrient-rich liquids mirror the conditions on the early earth? 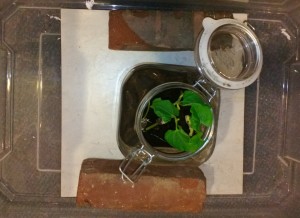 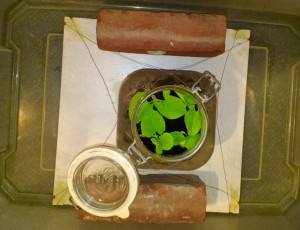 In 2012 Genesis Park staff conducted experiments with sunlight filtering in water. Bean plants were grown in two sealed jars with identical soil. One jar was submerged in water within a large clear tub (approximately a half meter deep in the water). A second jar was placed in an identical container with no water (a control group). The bean plants in the control group initially grew faster than those submerged. But the group submerged in the water bath grew thicker stems, more foliage, and appeared healthier. The experiment had to be curtailed after a couple of weeks because the plants grew to the top of the jar. The procedure was repeated multiple times with similar results. 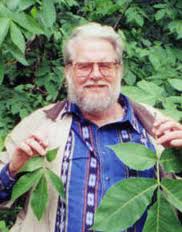 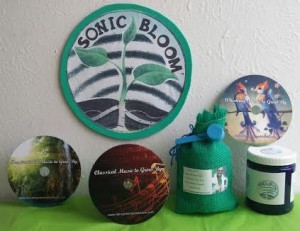 Dan Carlson was inspired by Genesis 2:6 (“But there went up a mist from the earth, and watered the whole face of the ground…”) to do experiments with “misting” plants. He also incorporated the music of birds with certain oscillating frequencies that open the plants’ stomata (shown to the left under a scanning electron microscope). While these pores are open, the leaves are sprayed with a plant nutrient enzyme. The results are amazing. A purple passion plant, which normally grows to about 18 inches, grew under Carlson’s care to a Guinness World Record 1,300 ft high plant. Carlson grew 10 inch long potatoes and cantaloupes the size of soccer balls. His system was dubbed “Sonic Bloom.” This patented process was used to treat apple orchards in Wisconsin. In a state averaging 290 bushels/acre, the mist and song bird music helped trees yield over 500 bushels/acre and the fruit has a shelf life of five months instead of the normal 30 days. Cucumbers, soybeans, cabbages, walnuts, tomatoes, cauliflower, mangoes, lemons and even redwood trees have been greatly impacted by this revolutionary agricultural system. (“Sonic Bloom,” Creation Illustrated, Vol. 7 No. 2, 2000, pp. 24-31.) 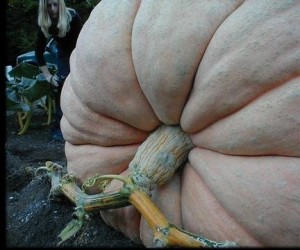 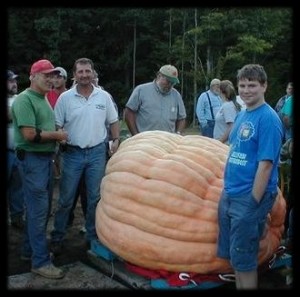 Genesis Park staff worked with a local “big pumpkin” grower to test the Sonic Bloom formula. The result was a 1,458 pound pumpkin that was the world’s record as of its weighing in September, 2003! Dan Carlson’s methodology appears to confirm the superiority of the original hydrological cycle present on the early earth.  It seems that, in addition to misting, there was extensive underground watering system. The fountains of the great deep that would later erupt and supply the bulk of the Flood water (Genesis 7:11) might have supplied an artesian system of active springs that fed rivers with fresh water in the absence of rain. We note in Genesis 2:10 that God made a river to flow through Eden (likely from a large underground reservoir) and water the whole garden. It produced enough water to support four significant rivers which then flowed out in different directions. If the early earth enjoyed a significantly higher oxygen content, it makes sense that God would have initially created a different hydrological cycle. The storm activity that creates rain also brings lightning, which would have had the potential to ignite devastating fires in a high-oxygen environment.