There are numerous reports of a strange, horned creature along the west coast of central Africa. French zoologist Bernard Heuvelmans discusses some of them in his 1959 book On the Track of Unknown Animals under the category of “water elephant” and “forest rhinoceros.”

In December, 1919, the London Daily Mail published a letter from C.G. James, who had lived in what is now Zambia. He reported on an enormous beast with a single ivory horn living in the waters of Lakes Bangweulu and the surrounding lakes and swamps. James said this animal was called “Chipekwe” by the natives. The same creature is also mentioned in both Millais’ 1924 book Far Away Up the Nile, and Hughes’ 1933 volume Eighteen Years on Lake Bangweulu. The latter describes Wa-Ushi tribesmen actually killing such a creature along the Luapula River that leads to Lake Bangweulu. They detailed how its smooth body was armed with a single horn fixed like that of a rhinoceros, but composed of smooth white, highly-polished ivory. Hughes tells of a hippo that was said to be killed by a Chipekwe. The throat was torn out. (Hughes, 1933, p. 146.) Indigenous peoples near Lake Edward in Zaire, call this same creature “Irizima” and refer to it as a “gigantic hippopotamus with the horns of a rhinoceros on its head.” 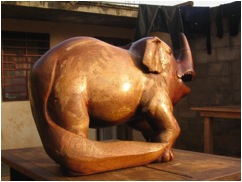 In 2000 Genesis Park staff trekked through the swamps of southern Cameroon, conducting interviews with indigenous pygmy communities. The Baka pygmies identified pictures of a Triceratops with an animal they call the Ngoubou. They reported it being big as an ox, possessing a neck frill, and sporting from one to four horns. Apparently the mature male has the largest frill. Perhaps this is the same species as the Emela-ntouka in the Congo and the observers there merely saw the single-horned variety or younger creatures. The Ngoubou is said to inhabit the savannas along the Boumba and Sanga rivers where it is known to fight with elephants. French cryptozoologist Michel Ballot’s 2004 photograph (left) of a native’s wood carving representation of Ngoubou bears some resemblance to the picture of the Emela-ntouka from Roy Mackal’s 1987 book A Living Dinosaur.