The “Emela-ntouka” of the Congo 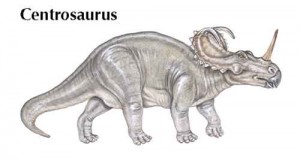 The same Likouala swamp region of the Congo which is supposed to be home to the Mokele-mbembe may also contain another living dinosaurian: the Emela-ntouka (literally “killer of elephants”). This stout, rhinoceros-like creature is reputed to have a penchant for killing elephants with its single prominent horn.

Lucien Blancou, chief game inspector in French Equatorial Africa in the 1950s wrote of a ferocious creature in the Congo, larger than a buffalo, that was considered the most dangerous animal by the Kelle pygmies: “…the presence of a beast which sometimes disembowels elephants is also known, but it does not seem to be prevalent there now as in the preceding districts. A specimen was supposed to have been killed twenty years ago at Dongou, but on the left of the Ubangi and in the Belgian Congo.” (Blancou, L. “Notes sur les Mammiferes de l’Equateur Africain Francais – Un Rhinoceros de Foret?,” Mammalia 18: 358-363, 1954.)

In 1981 Dr. Roy Mackal traveled to the Congo searching for the rumored sauropod dinosaur Mokele-mbembe. But he was surprised to hear reports of another mysterious animal called the Emela-ntouka or “killer of elephants.” The natives in the northwest region of the Likoula swamp told how it would gore elephants with its single horn. Mackal’s speculation that it was a ceratopsian dinosaur was cast in some doubt by the pygmies not recollecting a neck frill. The description, however, does not fit a rhinoceros which has a short tail and does not have a true horn composed of bone or ivory. It’s horn is composed of fused keratin (hair) and it seldom comes out the winner in a confrontation with elephants. Mackal left open the possibility that the Emela-ntouka was a still-surviving Centrosaurus. This member of the Ceratopsian family (sometimes called the Monoclonius) sports a single large horn on the center of its head as seen on left (Mackal, Roy, A Living Dinosaur, 1987, p. 236.). The ceratopsian identification has been strengthened by similar reports obtained by Genesis Park staff during a recent expedition to Cameroon (including some with a neck frill). It also matches the classical authors’ multiple references to a ferocious single-horned creature that spears elephants in the belly, and leaves them to bleed to death. Perhaps the neck frill is exclusive to the males or is a trait of a particular subspecies. The Centrosaurus may also be the same dinosaur as the Styracosaurus.