The “Burrunjor” of the Australian Outback 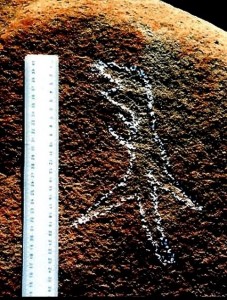 The vast expanses of central Australia’s deep Outback, where tortuous rock formations point skyward, mystical ancient forests contain living fossil plants, and parched desert scrub grows alongside weird salty lake bottoms, offers a frontier of largely unexplored wilderness. From this land of many mysteries comes a most eerie and incredible claim, reports going back to Aboriginal legends that mirror strange sightings by generations of European settlers, and even occasional stories of close encounters by recent travelers…stories of a living theropod creature like a Tyrannosauruss rex! 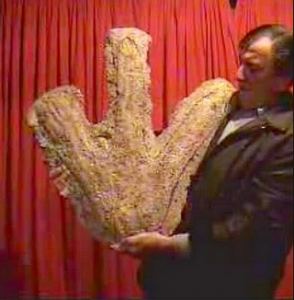 Aboriginal tribal peoples tell tales of the Burrunjor, the huge reptilian nocturnal creature that has devoured cattle, camels, and kangaroos. Ancient Aboriginal artwork displays a three-toed bipedal form with small front legs and a huge mouth. Clearly this is something different from their easily distinguished kangaroo artwork. Even still today Aboriginal peoples will fearfully avoid certain locales in which this creature allegedly was seen. And they will abandon areas for some time if tracks of the creature show up. These same tell-tale tridactyl prints have earned the monster the nickname “Old Three-Toes” by locals to the east. In the state of Victoria indigenous peoples called this same ferocious theropod the Murra-Murri. Numerous sightings of Burrunjor footprints have now been logged across the Outback. Pictures and casts show a consistent bipedal track with three huge toes, between 2 to 3 feet in diameter. Alongside watering holes, along riverbanks, and even in dirt roads, the monsters footprints have been reason for alarm. According to testimonials, cowmen came across these monster tracks in the process of investigating missing livestock. The Burrunjor has a penchant for grabbing cows and carrying them off! Rex Gilroy’s 2013 book Burrunjor!: The Search for Australia’s Living Tyrannasaurus lists several such scenarios where cows (sometimes several in a single kill site) were found bitten in half and large bones were broken by massive jaws. The area around these kill sites was covered with massive, tridactyl, reptilian footprints. 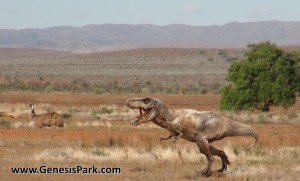 Recent sightings of the creature responsible for the massive prints and bovine butchery have been more rare. Burrunjors have been seen at night by truckers driving the Stuart Highway, which traverses long, lonely sections of the continent down under. A team associated with the Sci-Fi channel’s “Destination Truth” conducted a Burrunjor investigation in 2007 that focused on the northwest. In January of 2015 Genesis Park staff traveled to the Outback from the south, traversing the Stuart Highway from Adelaide up toward Alice Springs. The team kept busy hiking deep into the Flinders mountains and camping in the bush, interviewing eye witnesses (including park rangers, 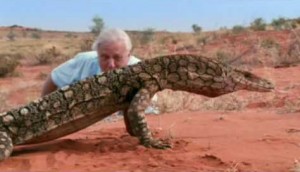 cattle station operators, aboriginals, and truckers) conducting nocturnal vigils, and searching promising areas for footprints. Not a single report of a creature fitting the Burrunjor description was received. The area is inhabited by a large monitor lizard (or goanna), called the Perentie. One Flinders Ranger claimed Perenties can grow to 10 ft in length. He observed such an oversized herp swallow a young goat whole and then rear up on its hind legs. Could some of the alleged nocturnal Burrujor sightings possibly involve a Perentie instead? At any rate, the Burrunjor creature doesn’t seem to be known in the lower Outback and follow up research might be more productive if focused on the north.