The Lake Murray Monster of PNG 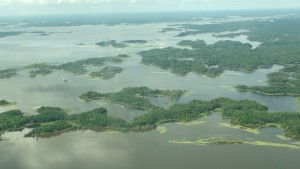 Lake Murray is the largest lake in Papua New Guinea (PNG), covering an area of about 700 sq. miles (though it shrinks and expands dramatically with the dry and rainy seasons). The lake’s serpentine shoreline creates many mysterious inlets and remote swampy coves. About 5,000 indigenous peoples inhabit this lake region in western PNG. Tribal villages dot the many small islands and lake shoreline, sporting houses on stilts and featuring dugout canoes as the main means of transportation.

A cryptid known as “Murray” reportedly lives in the swamps on the edges of the lake. This creature has been described as resembling a theropod dinosaur. A national PNG newspaper presented the following report: “On December 11, 1999, villagers travelling in a canoe reported seeing the creature wading in shallow water near Boboa. The following day, a Seventh Day Adventist pastor [Joseph Yup] and a church elder say they saw the animal not far from the first sighting. The creature was described as having a body ‘as long as a dump truck’ and nearly two metres wide, with a long neck and a long slender tail. It was walking on two hind legs ‘as thick as coconut palm tree trunks’, and had two smaller forelegs. The head was similar in shape to a cow’s head, with large eyes and ‘sharp teeth as long as fingers.’ The skin was likened to that of a crocodile, and the creature had ‘largish triangular scoops on the back.'” (The Independent PNG, December 30, 1999, p. 6.) 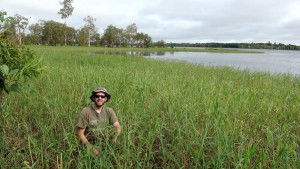 Genesis Park conducted research in a number of communities on the shores of Lake Murray through February of 2015. Our approach was not to ask about the monster directly, but to discuss wildlife in general and show them pictures of various animals to see what large creatures inhabited the region. (Pterosaur and hippo pictures were thrown in as a credibility check.) It was not difficult to find people who claim to have seen a large reptilian form that walks erect and is about 15 ft tall. Only a few of the villagers around the lake had actually seen it in the lake. More common were reports from village hunters of running into the creature in the remote swamplands and rivers that feed into the lake. Some interesting tidbits gleaned from these hunters include the facts that the monster has been observed eating large fish that it apparently caught (something also known from fossils of certain large theropods like Spinosaurus) and that these bipedal dinosaurs are adept at swimming! 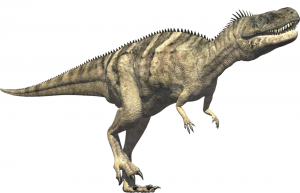 Witnesses were presented an array of theropod profiles and they consistently identified the reptilian monster with a T. rex or a Ceratosaurus with its conspicuous spikes running down its neck and back. The Ceratosaurus was the more popular choice, but the head horns gave witnesses pause. They said the monster had a flat head like T. rex. The identification of the cryptid as a Ceratosaurus actually fits well with the fossil evidence. Paleontologists like Robert Bakker have suggested that its elongated, flexible body and wide tail would have been well-suited for an aquatic lifestyle and made it effective at preying on fish and small crocodiles. A broad tail for sculling allows crocodiles to be powerful swimmers and likely played the same role in dinosaurs like Ceratosaurus and the infamous Spinosaurus. 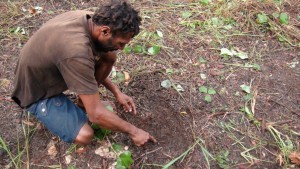 Along with detailing the dermal armor and large toothy head, the witnesses would draw clear tridactyl footprints. Some indigenous people who had not seen the creature had seen the tracks in the bush. Might the monster of Lake Murray be related to the Burrunjor of Australia? PNG is separated by less than 3 miles of sea from the northern tip of Australia (with a string of islands in between) and the descriptions are remarkably alike. While the testimonials from the local Lake Murray Monster witnesses came across as reasoned, consistent, and credible, more research is needed and a follow-up trip that would press further into into the swamps and rivers to the north is being planned.