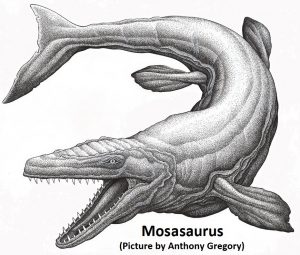 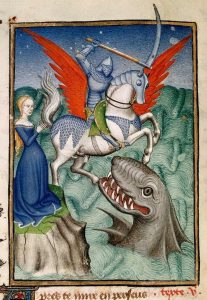 mosasaurus was a monstrous marine lizard (presumed to have become extinct about 70 million years ago) that grew up to 56 ft long, had large eyes, swam with powerful flippers and sported ferocious conical teeth. A modern reconstruction of a mosaurus is seen on the left. To the right is a depiction from the Middle Ages of St. George slaying the dragon. Although presentations of this event are ubiquitous in Medieval art, this is a rare portrayal of the monster as a swimming dragon, defending the captured princess on his island from the rescuing knight. Note the similarities to the mosasaurus’ unique features. Could Medieval sailors have seen the head and neck of these monsters poke out of the water in the way shown in this picture during their long, quiet days at sea? 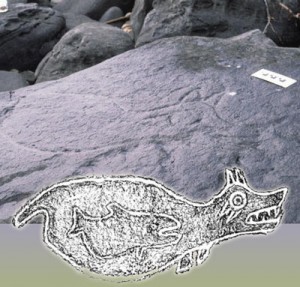 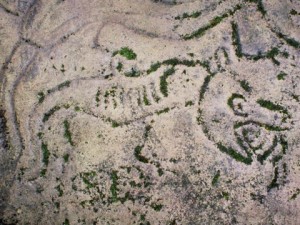 Native Americans of the Pacific Northwest have legends of the “Sea Wolf” or “Sea Alligator,” a fearsome, toothy ocean creature that attacked and ate whales. What did these Indians observe as they traversed the region of the Oregon coast, Puget Sound, and Vancouver Island in their canoes? Could this whale-eating marine saurian be a Mosasaur? Rock carvings of the creature vary from across the region. The drawing to the far left is from an ancient petroglyph found at Makah Indian Reservation in WA. It shows a bulbous body, a head that sports a fin or crest (like the Carian urn above) with the typical prominent jaws and sharp teeth. It seems that a pilot whale (technically a member of the dolphin family) is depicted in the monster’s stomach. If this is so, the creature would scale to about 50 ft in length. The ancient rock carving to the right of it more closely resembles the streamlined, elongated form of the Mosasaur as we know it from the fossil record. 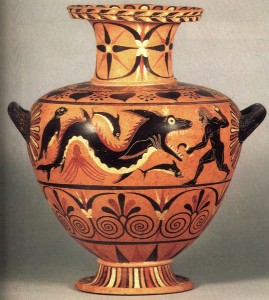 To the left is an urn from Caria, which was located in Asia Minor (modern Turkey). This artifact (described on page 114 of Thomas Carpenter’s 1991 book Art and Myth in Ancient Greece as “Herakles attacking a Ketos”) is estimated to be from 530 BC. It depicts what appears to be a Mosasaur with several obvious sea creatures. The animal behind the sea monster is a seal, while an octopus is below the creature along with what seems to be a small dolphin. The thick jaws, big teeth, large eyes, and positioning of the flippers on this creature match a Mosasaur skeleton very well. Some Mosasaur species also had a narrow cranial crest behind the eye that may have had a fin attached the way it is depicted on the Carian urn (click to enlarge). 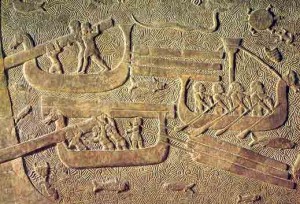 Eye witness accounts and depictions of sea serpents have come down to us from throughout history. In some of these cases, the creature could well have had a large portion of its body underwater (really a plesiosaurs form rather than a serpent form). The very first recorded sea serpent observation was made by Sargon II on a Mediterranean voyage to Cyprus at about 720 BC – 705 BC. This cryptid sighting seems to be memorialized by a very interesting frieze made during the Assyrian domination of Phoenicia (late 8th century BC). It shows Phoenician longboats loading up lumber. Notice the sea serpent with its neck upright in the background up top. Its large size can be judged by the sea turtle depicted just in front of it. 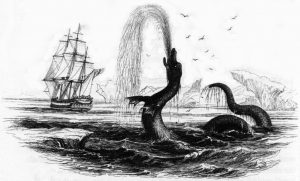 During the Medieval period, the Scandinavians described swimming dragons and the Vikings placed dragons on the front of their ships to scare off the sea monsters. The one pictured to the right is based upon the 1734 sighting by Hans Egede. As a missionary to Greenland, Egede was known as a meticulous recorder of the natural world. Numerous such stories have been recorded from the age of sailing ships (1500-1900 A.D.) when sailors plied the seas much more quietly than in today’s large, motorized crafts. The oldest reliable sea serpent record we have was set down by Olaus Magnus in his book Historia de 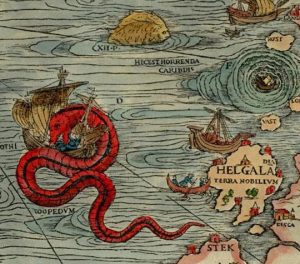 Gentibus. The story describes a Catholic priest who was exiled from his Swedish homeland and saw a sea monster “of an astonishing size” (about 23 meters or 75 ft long) that was sighted in 1522 near an island named Moo. Magnus’s credibility is attested by his most famous work, the 1539 book Carta Marina, which presented the most accurate map of Scandinavia or any other European region in existence at the time. A series of drawings on the map present various monsters of the sea. The most notorious of these is a creature named the “Sea Orm” but best known as “Olaus’s Sea Serpent.” It was colored bright red, despite being described as black. The drawing shows it coiled around a Norman ship and devouring a crew member who was unlucky enough to get close to its gaping maw!

A popular story from Greek mythology involves the Nereids (sea nymphs) bringing armor to the city of Troy for the great warrior Achilles. These women of the sea are typically shown riding on sea serpents. Below left is a painting that is displayed at the Museum of Ruvo di Puglia. To the bottom right is Greek art showing the Sea Goddess Thetis meeting Achilles, with the Nereids following behind her. It is dated to about 400 BC. 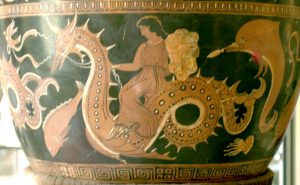 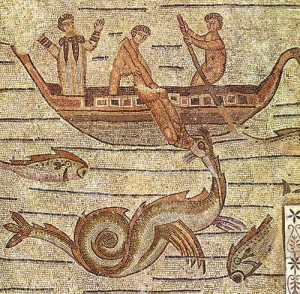 Many ancient sea serpent depictions show the creature coiling vertically and displaying “humps” that come out of the water. This makes it very unlikely to be a extant type of plesiosaur. A good example is the Aquileia Basilica floor mosaic to the left (click to enlarge). The church is located in northeastern Italy. Dating to about 400 AD, the mosaic shows the mariners throwing the prophet Jonah into the sea. The prophet is being swallowed by a ketos (sea monster) in the form of a sea serpent. A similar mosaic can be found at Monasterace Museum. This beauitful drago marino (sea dragon) art found at Caulonia in Italy dates to the 3rd century BC. Notice that these ancient artists depicted a fluke-like tail, mane, and horse-like head. These features are remarkably like the modern reports of Cadborosaurus and Ogopogo. 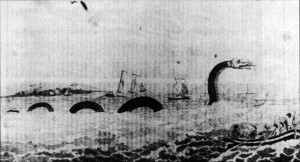 In the 1800s there ere a number of sea serpent sightings off the coast of Gloucester, MA. One incident involving numerous witnesses in Nahant Bay was memorialized with a sketch (right). Although this massive serpentine form is not known in the fossil record, zoologist Karl Shuker speculated that some of these encounters

might have involved a still-living Basilosaurus (lower right), a slender whale-like creature supposed to have been extinct for millions of years. (Shuker, Karl, Dragons: A Natural History, 1995, p. 38.) It possessed small fins, a flexible neck, a tail fluke, and could undulate its long body vertically (unlike terrestrial snakes that coil horizontally). The fossil creature was given this name because the early 19th century paleontologists thought it to be very reptilian. Indeed “Basilosaurus, which is over 20 m long and, unlike modern whales, must have looked like a classic sea serpent because of its tiny head and long, thin body.” (Benton, Michael, Vertebrate Paleontology, 2015, p. 373.) 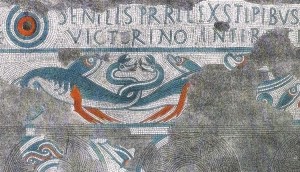 To the far right is the Roman mosaic from about 200 AD found at Lydney Park Temple in Gloucestershire, UK. The mosaic depicts two long-necked sea dragons (click to enlarge). Some fish are shown in the mosaic as well. Creationist Paul Taylor likens the dragons to the web-footed Tanystropheus shown immediately to the right.

Plesiosaurs were a group of long-necked, round-bodied ocean-going reptiles that were believed to have gone extinct along with the dinosaurs. Nearly complete skeletons from England give us a very good idea of what these ancient sea monsters looked like and a modern reconstruction of a swimming plesiosaur is shown to the left. However, there are stories of a plesiosaur-like creature seen in Queensland, Australia. Both aboriginal peoples around Lake Galilee and tribes farther up to the north tell of a long-necked animal with a large body and flippers. “Elders of the Kuku Yalanji aboriginal tribe of Far North Queensland, Australia, tell stories of Yarru (or Yarrba), a creature which used to inhabit rain forest water holes. The aboriginal painting to the lower left depicts a creature with features remarkably similar to a plesiosaur. It even shows an outline of the gastro-intestinal tract, indicating that these animals had been hunted and butchered.” (CEN Technical Journal, Vol.12, No. 3, 1998, p. 345.) The tribal stories tell how the Yarru once devoured a young maiden. A missionary asked one of the tribe’s artists to paint the story. The Aboriginal artist, with very little formal education, had no knowledge of what ancient plesiosaurs looked like, and was drawing only from the details handed down in the ancient stories. 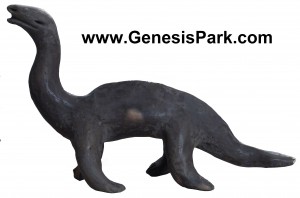 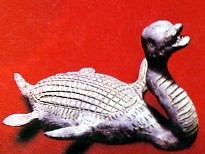 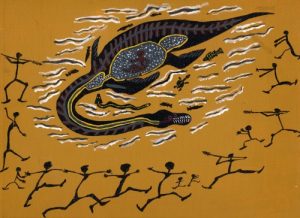 The Ancient Dinosaur Depictions page gives the story of the clay figurines found in Acambaro Mexico and dated from before the second century AD. A distinctive plesiosaur figure was also discovered (above middle). The pudgy body, short tail, flippers, long neck and head are all compelling. Another of the many Acambaro dinosaurian figurines looks like the prototypical “sea monster” (above right). The shorter neck is a bit more like that of the swimming pliosaurus. 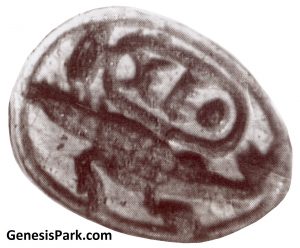 An Egyptian scarab seal (right) has been found with the cartouche (official name inscribed within an oval) of Tutmosis III. It is from approximately 1400 B.C. This seal appears to show a long-necked plesiosaur-like animal. The anterior and posterior flippers are distinctively represented with the narrow connection to the rotund body of the creature. The seal was originally part of the Mitry collection and is of unquestioned authenticity. The ancient Egyptians are known for their keen observation and accurate zoological representations, particularly with regard to river and

sea creatures. Some have suggested that it is a poor representation of a crocodile. But compare this to the seal just below (also from the Mitry collection) which clearly shows a Nile Crocodile. Especially note the differences in the neck, head, snout and feet. 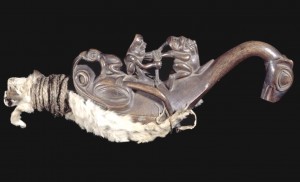 From the Pacific northwest of America comes an intriguing sea monster shaman’s rattle, shaped roughly like a plesiosaur. This Tlingit artifact from Alaska shows a shaman on the back of the monster, tying up a witch. A frog (representing and evil spirit) is on the back of the long-necked creature and another frog is emanating from the witch’s mouth. The piece, currently housed in the British Museum in London, certainly bears a remarkable resemblance to the great marine reptiles.

For every ancient depiction of the great walking, flying, and swimming reptiles shown on these Genesis Park pages there are three or four others that could have been included. We have included only those that have been investigated by our staff or previously published.  One would think that such hard evidence would be highly problematic for evolutionary theory. Indeed Dr. Philip Kitcher, in his anti-creationist book Abusing Science, claimed that solid evidence that dinosaurs and man co-existed would “shake the foundations of evolutionary theory.” (1998, p. 121) Likewise, the evolutionary author Arthur Strahler insisted that “it is conceivable that a scientist will some day discover human bones among dinosaur bones in such a relationship that it is judged highly likely that humans and dinosaurs lived at the same time. Such a finding would deal a crushing blow to the widely favored hypothesis of a unique evolutionary sequence. In Popper language, the hypothesis of evolution would be falsified.” (Strahler, Arthur N., Science and Earth History: The Evolution /Creation Controversy, 1999, p. 17.) Unfortunately the history of Darwinian theories suggests that all such evidence would quickly be assimilated into evolutionary theory. Darwinism makes no firm predictions and the “Just So” stories can be changed on a dime. But one can at least hope that as more evidence comes to light, the credibility of the evolutionary story-tellers will at last wear thin!