The Leviathan of Job 41 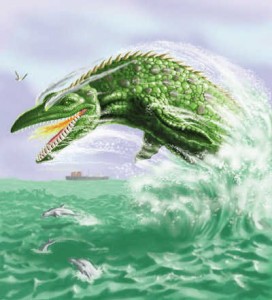 Job 41 portrays a singularly awe-inspiring creature: Leviathan. While clearly one of the fiercest creatures that God made, it is difficult to establish exactly what Leviathan was. The Bible describes a sharp-toothed, scaled creature whose habitat is the mire and deep waters. Ken Ham of Answers in Genesis suggested the ferocious kronosaur as a candidate. (Ham, The Great Dinosaur Mystery Solved!, 2000, pp. 43-47.) But vs. 22 seems to indicate that Leviathan had a distinct neck. Others have suggested that this fire-breathing monster was a land-dweller that merely spent much of its time in the water. Perhaps leviathan was a dinosaur with armor or claws whose “sharp stones” were employed to destroy ancient weapons. Maybe we have yet to discover the remains of a leviathan. Isaiah 27:1 mentions the Leviathan and calls it a “crooked” or a “twisted” serpent, the dragon of the sea. This brings to mind the way a snake coils up. Perhaps the Leviathan was something like the sea serpent recorded in ancient times. Amos 9:3 tells of a biting serpent that lives at the bottom of the sea.

Further support for the Leviathan being a sea-dwelling dragon comes from the Ugaritic literature of ancient Mesopotamia. In the story (roughly contemporary with the writings of Job), Baal becomes the head god by defeating the raging seas and the Leviathan that lives there (Heiser, The Unseen Realm, 2015, p. 155.). The ancient historian Pliny the Elder recorded some of the huge sea monsters known during the days of the Roman Empire. In 58 BC one particular carcass, that seems to be a good candidate for a Leviathan, was carried from the seacoast up to be displayed in Rome’s largest theater: “The skeleton of the monster to which Andromeda in the story was exposed was brought by Marcus Scaurus from the town of Jaffa in Judaea and shown at Rome among the rest of the marvels during his aedileship; it was 40 ft. long, the height of the ribs exceeding the elephants of India, and the spine being 1 ft. 6 inches thick” (Pliny, Natural History, Book 4, IV [translated in 1949 by H. Rackham].). 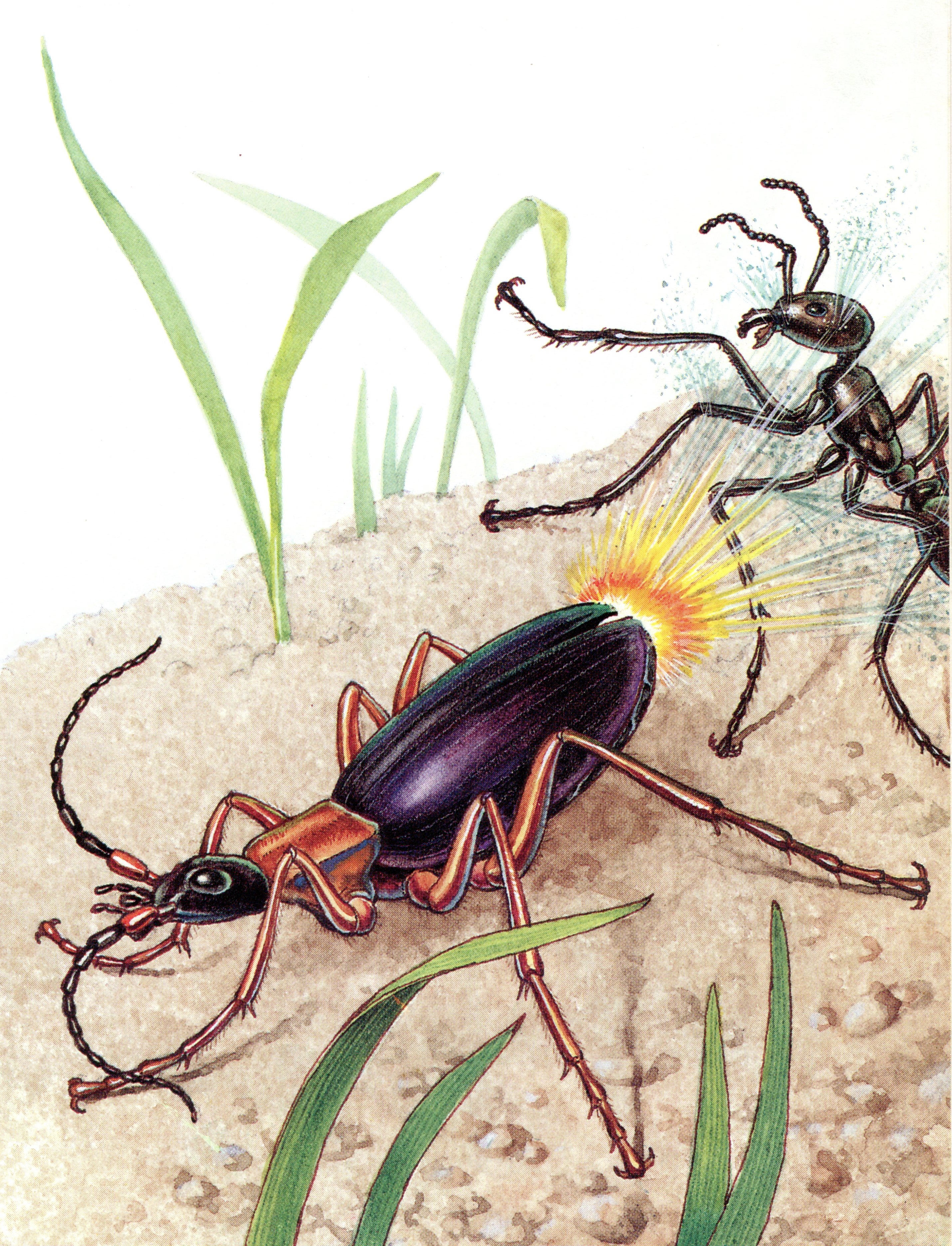 Skeptics mock at the idea that “fire-breathing monsters” have any basis in reality. But who would have thought that an electric eel or firefly was real if they had not been seen? A few lines of evidence should be considered. Firstly, there is the fairly clear teaching of scripture. The Bible leaves very little room for a hyperbole or metaphor interpretation. Job 41:19-21 says of Leviathan that, “Out of his mouth go burning lamps, and sparks of fire leap out. Out of his nostrils goes smoke as out of a seething pot or caldron. His breath kindles coals, and a flame goes out of his mouth.” Secondly there is the matter of historical evidence. That is, multiple societies that were widely separated tell stories of fire- 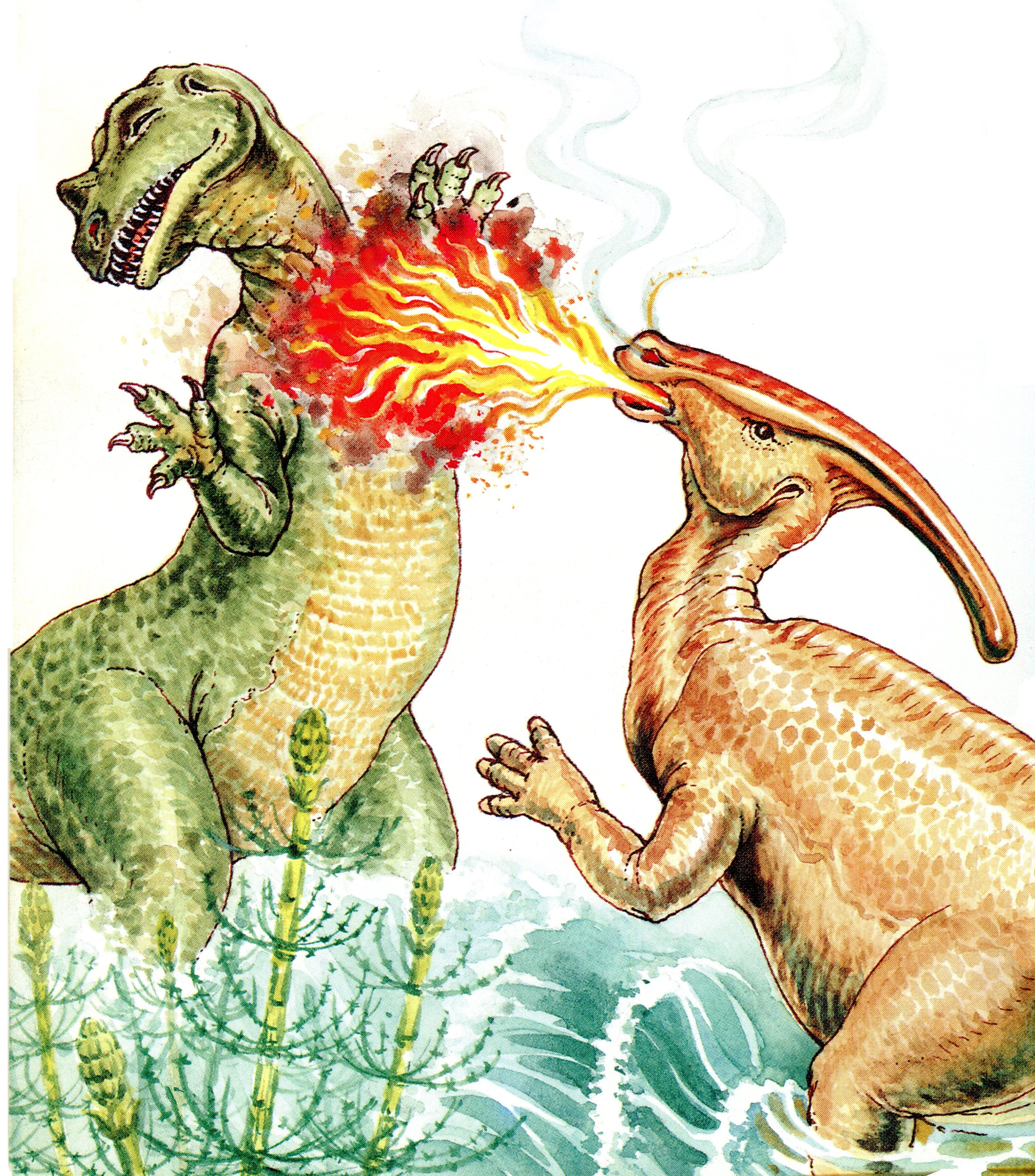 breathing dragons. Why did they all chance upon the dragon? Thirdly, we can consider some biological evidence. There is a “fire-breathing” beetle called the bombadier beetle. Hydrogen Peroxide and Hydroquinone are contained in separate chambers in the beetle’s abdomen, from where they can be ejected with a catalyst to confront a predator with an explosive mixture reaching 212º F! Lastly, there is some paleontological evidence that a skull arrangement might have accommodated “fire-breathing.” In his delightful book Dinosaurs by Design, Duane Gish discusses how the hadrosaur nasal cavity could easily have connected to chemical reserves in the hollow, horny crest. There are four separate passage in the crest, two running up from the nostrils and two running down toward the throat. The Old English word “neesings” in Job 41:18 denotes a voluntary sneeze. Perhaps Leviathan used this ability as a defensive weapon, just like the beetles. No wonder God uses him to make the point in verse 10 “None is so fierce that dare stir him up: who then is able to stand before me?” This helps us understand God’s purpose in creating such huge, fearsome reptilian monsters. We would be terrified to have a close encounter with them. Do we realize that we will have a close encounter with their Creator? Each of us will give an account to our God after we leave this world (Hebrews 9:27).