The Behemoth of Job 40 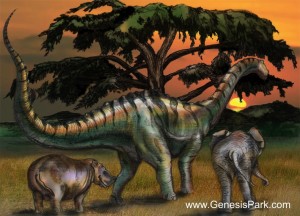 Job is the oldest book in the Bible. This book is very interesting from a scientific perspective because of the many natural phenomena that are addressed by God, Job, and his friends. Along the way, God points Job to two special creatures. The first, mentioned in Job 40:15, is usually transliterated over from the Hebrew as “behemoth” in the English Bible. God commanded Job, “Behold now behemoth…” This wasn’t an option. God wanted to use this huge creature to make a point to Job of His divine power as the Creator.

Some commentators have suggested that behemoth was a hippo or elephant. But the passage makes clear that this herbivorous animal was “chief of the ways of God.” Certainly the hippo and elephant (which had other Hebrew names) don’t qualify as the biggest land animal, nor does their anatomy fit the clear language of verse 17, which says, “he moves his tail like a cedar.” The cedar tree was the biggest and strongest trees in the region, used for constructing large projects and making weapons like clubs. The cedar analogy brings to mind a dinosaur’s huge tail!

In fact, pygmy peoples in equatorial Africa tell stories of a ferocious dinosaurian creature that occupies their swamps and rivers and lashes its opponents with its tail. This creature, which they identify as a dinosaur, will fend off elephants crocodiles, and even hippos with its tail.  It becomes fascinating, as one considers the tail as an offensive weapon, to review the description of Satan as a dragon: “And there appeared another wonder in heaven; and behold a great red dragon …And his tail drew the third part of the stars of heaven, and did cast them to the earth:” (Revelation 12:3-4). The tail is the offensive weapon of the dragon!