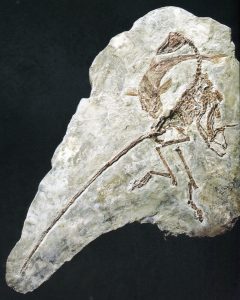 The geological layers can be divided into megasequences, packages of sedimentary rock bounded top and bottom by erosional surfaces. The first three of these (Sauk, Tippecanoe, and Kaskaskia) contain mostly ocean-dwelling organisms. The higher three (Absaroka, Zuni, and Tejas) contain many terrestrial animals.  Dinosaur fossils are particularly plentiful in the Absaroka and Zuni rock units. But throughout these fossil layers there are also marine organisms. For example, the Hell Creek Formation of the American west has yielded an abundance of famous dinosaur fossils. But less attention is given to the six species of sharks and 14 species of fish found buried alongside them. (Clarey, Tim, Carved in Stone, 2020, p. 303.) The mixing of marine and terrestrial environments is not a rare occurrence isolated to the northwest part of America. Sharks, sawfish, and coelocanths were found in the same rock layers as Spinosaurus in Morocco. (Durham, Louise, “Shell Makes Large Discovery on Deepwater GoM,” AAPG Explorer 39, 2018, pp. 24-25.) Dinosaur fossil in Europe occur in marine deposits alongside the preserved remains of marine invertebrates. Dinosaur fossil buried in obvious marine sediments is the rule, not the exception. This is powerful evidence of a worldwide Flood catastrophically laying down the vast fossil-bearing layers that cover our continents.